We three have, after much discussion come to the conclusion that we have done as much here as we can. We have told our stories openly with as much candour as we can, leaving ourselves completely exposed in public, in the hope that others who have hesitated will come forward and speak as we have. There are some who have, many can be found on our links. Please try them and see what has happened to these other ones.

We believe our stories speak for themselves as to why all three of us have come to believe that Khalistan must be more than a dream. It must become an independent land where we can live with dignity and safety. A land of justice and hope and respect for all people. But to quote from an American song of 1969, 'if we can't do it with a smile on our face, if we can't do it with love in our hearts, then children, we ain't got no right to do it at all. That just means we ain't learned nothing yet. We're supposed to be some kind of different.'

There is much more we could write, all of us have another 22 years during which we have grown, run, fallen, picked ourselves up and kept going. We have laughed and cried, worked and rested, worshipped and prayed. In short, we have lived our lives. But we have decided that those are other stories for other blogs.

We have only to complete what we want to say now.

The pain we have felt from these events has not healed or lessened over time. The common belief that 'time heals all wounds' is a fallacy. The wounds have become a part of us and we have learned to some extent how to live with them. We have learned to grow stronger and more courageous, we hope, in the process. Sometimes we are asked, do you think about this all the time? Of course not, but it is always with us. If you ask our gender, we don't have to stop and think, I'm a woman; it's just there. This is much the same and it is that much a part of each of us.

Nothing could ever justify what we, all of us Sikhs, went through. There can be no justification for evil and injustice nor should there be. Should twenty-two years be enough to start to distance ourselves from this? When young people say,'Get over it!' is there any validity to that? No, we will never get over this, nor should they ask us that of us. And we sincerely pray that they will never have a pain such as this to understand what we have been through.

For the two of us, Suni and Mai, the hardest part is facing the sheer hatred and maliciousness of people we had thought of as our brother-in-heritage Indians. (Vini never had this illusion.) Although we were both mothers in our thirties and thought of ourselves as worldly and sophisticated, in fact, we had been protected and sheltered from the sheer ugliness of our fellow humans. Although we read newspapers and saw television news accounts of such things the American civil rights movement, the various wars and the killing fields of Cambodia, these were things that happened to other people, people who weren't quite real to us. Now that has changed.

When we see a mother holding the dead body of her child in Iraq or a woman's vacant eyes after seeing her family hacked to death in Rwanda, we see and feel no difference between us and them; they are us and we are them. The horrors and injustices of our age continue. If not for one thing, the sheer evil around us would overwhelm us and render us useless.

But we have that one thing. We are Sikhs. We have a way of being in this world that both gives to us and demands of us the strength not to give up hope and not to stop fighting against the wrongs we see and experience. Along with everyone else, we saw on 9/11, with horror, airplanes fly into buildings and the world go mad.

With great apprehension, we saw pictures of the leaders of those who did these things. You saw those pictures and, we're sure had the same sinking feeling we did. You know, the beards and the turbans. Our fears were not baseless, as it turned out. Some of us have been murdered. Many of us, especially our keshdhari men, have had to learn to live with a new prejudice: Americans who hate us for being what we aren't, Muslim. Some little good, however, is coming out of this. People are beginning to learn who we are and a bit of what we believe in.

We know we are not going to solve the problems of the world with our little blog. But please accept this as a small sewa from three women who would like to make the world a little better, and to help Sikh sisters and brothers, especially our Khalsa sisters and brothers, to stand a little taller and be a little more determined to live up to being the people our Gurus taught us to be.

If anyone wants to add anything to this blog, just leave a comment or email us, we will be overjoyed to contact you. Or if you have any further questions or comments for us, we love to hear from you. We all have our private blogs, which we choose to keep private, except Mai, who invites you to visit her at sometimes 2 http://mai-sometimes.blogspot.com, if you wish.

Let us clutch with our whole being what we are and never forget:

The Name Is Truth,

With much love from Vini, Suni and Mai
Posted by Dharma Kaur Khalsa at 10:40 PM No comments: Links to this post

Email ThisBlogThis!Share to TwitterShare to FacebookShare to Pinterest
Labels: End

Another possible flag for 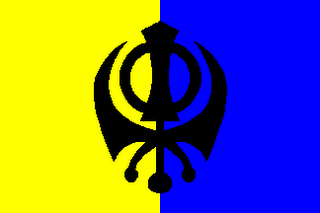 
This post was originally published by Mai in September 2006.

(I know that this is an absurdly long address, but it's the best we know how to do.)

More pictures are also available in the links on the right, notably the Gatka Gallery. I know they are difficult to look at; I found the last photo on the Gatka Gallery page particularly horrifying. But...LEST WE FORGET...

After 22 years, I cannot let go of those few days.

'Oh, get over it! It was all so long ago! Nobody cares about that stuff anymore. Anyway, India's changed. They even have a Sikh prime minister now.' (Puke.) Did he really apologise on behalf of the Indian government, as I have read?

Thousands murdered, tortured, burned alive, children and husbands slaughtered in front of their wives. I know. I am one of those wives. We tried to fight the mob, but there were just too many of them. The death toll in our one home: two husbands, two sons, two brothers, two unborn children, whose first breath was their last.

My sister/cousin, Suni and I come from fairly well-to-do families in Canada and India, so we did not, at least, suffer financial hardship, as so many of the '84 widows did. They lost not only husbands, fathers, sons, but also their livelihoods, and being destitute in India is its own special hell. It takes a very special sort of cruelty to kill off the men and leave the women to fend for themselves.

At first I wanted vengeance. But - I have never told this to anyone - that was satisfied when the Air India plane went down in June 1985. My sister/cousin, Suni, who had also survived, and I were at my brother's home in Montreal when the news flash came on the television. We looked at each other and instantly surmised what must have happened and why. Our eyes met and we both burst out laughing. We laughed until tears ran down our cheeks.

I felt that the weight of the world had been lifted off my shoulders. I spoke to our dead shaheed men and told them that now they could relax. I am not proud of this reaction. In fact, I am so ashamed of it that I have kept it all these years as my secret. Now I am publishing it on the Internet for the whole world to see. I pray that Waheguru will forgive me; I will never be able to forgive myself.

I remember on 9/11 seeing a Palestinian woman with large glasses and wearing hajib, dancing and laughing, celebrating in the streets. I heard so many condemn her, but I understood how she must be feeling. I wondered who she loved that had been killed and felt a close kinship to her. Like it or not, we are sisters in this. I fervently pray that you reading this never find out what can drive a person to such a reaction.

I am surprised how easily this all flows out of me. That day, I learned that I was not the nice, civilized person I had always thought I was. I have this deep, horrible ugliness inside my being that I dare not give expression to except here.

My husband, who is not Sikh, just came up and read what I have written. He almost never tries to order me around, but this time he said, 'Delete it!' and walked away. I know what he is thinking, that I have said that Sikhs in post 9/11 America are having a hard enough time and I don't need to aggravate the situation. But this time he's wrong.

To begin with, most Americans have no idea what a Sikh is. They see a turban and a beard and they see a Muslim. Also I think I have made it clear that my reaction was immoral, uncalled-for and disgusting. If any friends or relatives of people on that plane see this, please know that I am sorry for my reaction. I cannot take it back and I don't ask for your forgiveness. I have never been able to forgive those who cheered on the murdering bastards who killed my family or those who today have the nerve to say, 'Get over it!' I cannot expect you to do what I am unable to do.
But still:

TWENTY-TWO YEARS AND NO JUSTICE

Note from Suni: Everything Mai has written in this post applies equally to me.
Posted by Dharma Kaur Khalsa at 2:10 AM No comments: Links to this post