There are two stories today that need to be reported, three actually, but two here, one concerning Jasbir Singh, one Laibar Singh, followed by a more personal statement.

The first is that the father of Jasbir Singh, the witness against [Jagdish Tytler] has reported that his son has been threatened in the United States. Here is the story .
84 Riots: My son being threatened, says witness against Tytler
By IE


The father of Jasbir Singh, a key witness in the 1984 anti-Sikh riots case
against Congress leader Jagdish Tytler, today alleged claimed his son was being
threatened in the United States.

"Jasbir has told me that he was being threatened there," Sattu Singh said.

CBI had filed a closure report in the 1984 riots case involving Tytler and
had claimed that Jasbir, who had submitted an affidavit before the Nanavati
Commission that probed the riots, was not traceable. However, he told TV
channels claiming that CBI had never approached him to be a witness.

The investigating agency immediately sent him a request for recording his
statement to which he has not responded till date.

Asked about the possibility of Jasbir's return to India and assist CBI in the
case, his father said, "it's natural that if he comes here, the threats (to him)
would be more. They can even get my son killed."

He also claimed Jasbir's children, who are staying with their grandparents in
the national capital, were being threatened by some people apparently belonging
to the establishment.

"Four people came to the house and they started threatening. However, they
had to beat a hasty retreat after some neighbours intervened," he claimed.

The second story is from the Christian Radical , the zine of the Vancouver Catholic Worker Community about a community meeting in support of Laibar Singh. Although this meeting is primarily for those not of our Sikh and Punjabi communities, I thought it would be of interest to our readers, as well. I think that many of us have felt abandoned by the larger Canadian community.

And here is a shiny, brand-new blog, with only one post so far: Support Laibar Singh. Please visit it and comment.

And again, I hope someone has brought him a cheerful blanket. 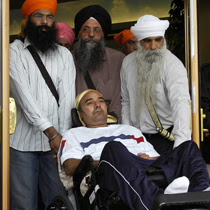 Last Thursday there was an emergency
meeting called by concerned activists and allies to organize support for Laibar
Singh to stay in Canada. This meeting was also to organize against the racist
backlash fueled by the misinformation that various media outlets have been
spreading about Laibar and his supporters. We came together primarily as people
outside of the
Punjabi and Sikh communities, inspired by the strength and
solidarity that has been shown by those communities in the numerous actions that
have recently taken place in support of Laibar Singh.

This first meeting
was a success, with large attendance and the formation of 'Communities for
Laibar Singh'. At this meeting we resolved to take on a number of projects to
build support for Laibar, as well as find ways to support the work that is
already going on in the Sikh, Punjabi, other South Asian communities on this
front. Some of these projects include:
- A
public forum on Laibar's case, which will take place Saturday January
12th.
-Regular petitioning, tabling, and picketing on
campuses, skytrain stations, and other public places.
- Support for future
actions taken by the Punjabi and Sikh communities for Laibar Singh.

We
encourage people who are interested in getting involved with this campaign in
support of Laibar Singh to attend this meeting. This call is particularly for
allies in the community, acknowledging the need to disrupt the media's
characterization that support for Laibar Singh comes only from South Asian
communities. This call is also being made out of a sense of responsibility -
acknowledging that South Asian communities should not be alone on the forefront
to respond to current climate of increasing racist backlash.

My third story is more personal. Most of my husband's family lives in Kenya, which is currently su 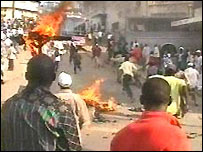 ffering post-election violent upheavals. Their lives are in immediate danger. Without taking sides in this conflict, in some ways it reminds me of the kind of hatred and violence we experienced in 1984. I have posted about this in sometimes - 2. If you are interested, please read this post. Thank you.

--
Some see things as they are and ask, Why?
I dream things that never were and ask, Why not?
Bobby Kennedy
Posted by Mai at 9:06 PM No comments: Links to this post