HOW TO TELL A SIKH FROM A TALIBAN, ILLUSTRATED EDITION

Before I start, let me say that in writing about the Taliban, I am not indicting the Muslim community, which has many good, upright adherents, some of whom I am honoured to include among my friends. Please do not construct anything I say about Taliban to apply to the millions of Muslims who are peaceful, constructive and valued citizens of countries all over the world.

Do to a certain shallow, outward physical resemblance to some Muslim extremists, our Sikh community has been under attack since the 9/11 terrorist attacks by those who don't know any better. Now events in Pakistan, where the Taliban has attacked the Sikhs of the SWAT Valley, forcing them out of their homes, make a comparison of the two groups mandatory for anyone who really wants to understand world events. (And to stop picking on innocent Sikhs, as well.)


First, what exactly happened in Pakistan? The government there has effectively turned over control of a region in the north of the country, the SWAT Valley, over to the Taliban. In a region of this valley called Orakzai live - or rather lived - a few Sikh families. These were poor Sikh farmers who had lived in peace with their neighbours for generations, who had chosen to stay in Pakistan when most Sikhs left to move to India in the Partition of 1948. These are people with few material resources who clearly love their homes and simple way of life.


These were destroyed when the Taliban demanded that they pay a tax on non
Muslims, called a Jaziya. I have read that jaziya was originally paid by nonMuslims in lieu of military service. I have also read that it was originally a financial inducement to convert to Islam. Whatever the original purpose, in this instance, it is clearly simple extortion, not unlike "protection money" paid by business owners to organised crime to insure that the Mob will leave their businesses alone.

The amount demanded by the Taliban, was beyond the means of the community and when it was not paid, the houses of the Sikhs were razed and Sikh businesses were occupied. The Sikhs, seeing yet another massacre looming, fled with little more than the clothes on their backs and a few meager possessions.

Lahore: The Taliban has expelled at least 50 Sikh families from the
Orakzai Agency in the Federally Administered Tribal Areas (FATA) after
they failed to pay 'Jazia'. The Taliban had demanded 12 million rupees ($242,840, GBP 161,271)
as protection money from the Sikhs, who have living in the region from
hundred of years, but they could arrange only 6.7 million rupees.($135,586, GBP 87,355)

Later, it was reported that the extremists occupied houses and shops
of the Sikhs in Qasim Khel and Feroz Khel areas of the Agency and
auctioned their valuables for 0.8 million rupees ( $16,190, GBP 10,750), The Daily Times
reports. Earlier, the Taliban had also demolished houses belonging to
the Sikh community in the region.

The Taliban's Orakzai Agency chief Hakeemullah Mehsud ordered the
demolition of the houses after the Sikhs failed to meet a deadline
fixed for payment.


Having established, I hope, that Sikhs are not Muslim extremists, who then are Sikhs? Briefly, a Sikh is a follower of Sikhi or Sikhism, a panentheistic (look it up!), monotheistic religion that originated in Punjab, in what is now northeastern India and southwestern Pakistan. Rather than summarise the beliefs, which is really beyond the scope of this article, I suggest you go to about.Sikhism and look around. It's interesting and educational.
The religion sprung up and developed at a time when Mughals (Muslims) had imposed a brutal dictatorship on the people of part of what is now called "the Asian subcontinent," that is India and Pakistan. I will now compare some aspects of Taliban and Sikhs.
Since people are generally more visual than verbal, I have included a picture gallery of major differences between the two groups below.
There is a certain superficial physical resemblance. The men of both groups grow beards and wear turbans. The majority of members of both groups are brown. The Taliban, however, are by and large Arabs, with Middle Eastern origins.   I stand corrected.  The Taliban are, by and large Pushtans of Afghan origins.  Although there is a growing number of Sikhs of European and African descent, most Sikhs today are still either
Punjabis or descendants of Punjabis.

Taliban discriminate against women in many ways: imposing Muslim dress which completely covers her, denies her education, restricts her movements so she is not allowed to go outside unless accompanied by a male relative. (I wonder what happens to a woman who has no male relatives?)
Sikhi teaches that men and women are equals. In fact, the Sikh Rehat Maryada - the Sikh Code of Conduct - forbids a woman to cover her face.

Here is an example of Sikh music, a sort of hymn called a kirtan. Notice that it has a happy sound and is a joy to hear! Also notice that it is sung by a woman!
.

I cannot give an example of Taliban music, since the Taliban ban music entirely, even to the point of killing songbirds when they controlled Afghanistan.
I cannot give a current example of Sikh government, since the Sikh Empire (1799-1849) governed by Maharaja Ranjit Singh is no longer around. However, two big differences between Sikh rule at that time and Taliban rule now are that capital punishment did not exist in the Sikh Empire, while it is common among the Taliban. And a huge difference, different religions were not only tolerated in the Sikh Empire but were actually respected, while the Taliban not only lack respect or tolerance for other religions, but also condemn all other forms of Islam, their own religion.
But enough of words. I have written enough to tell about the differences, now a few pictures to show the differences. 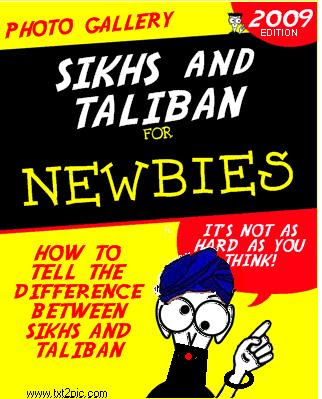 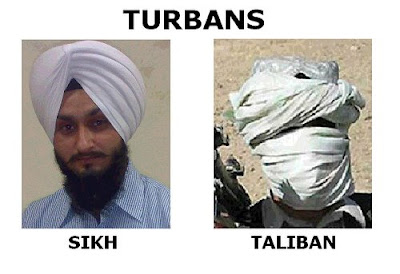 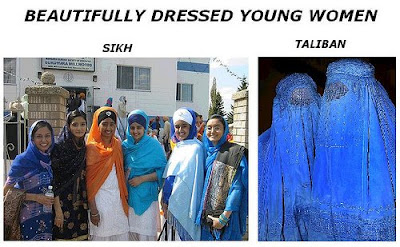 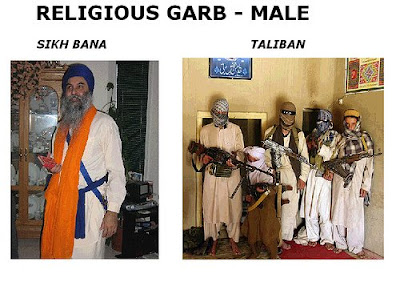 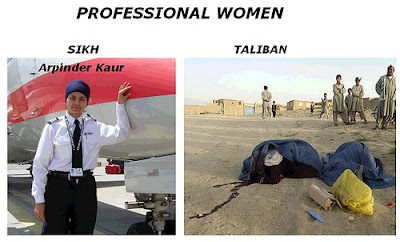 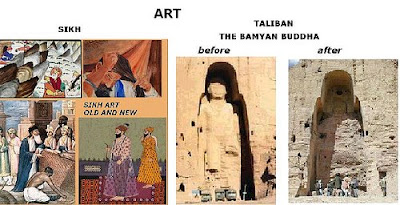 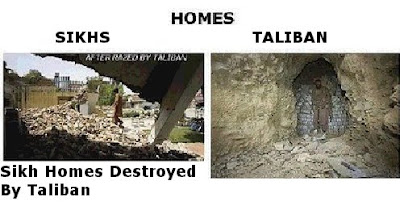 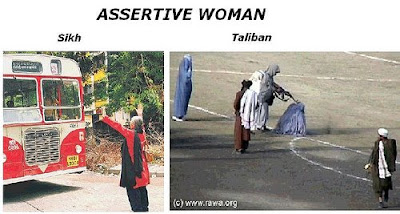 AGAIN, PLEASE NOTE:  THIS ARTICLE IS ABOUT ONLY THE TALIBAN.  MOST MUSLIMS ARE DECENT, PEACEFUL, LAW-BIDING PEOPLE WHO ARE AS APPALLED BY THE EXCESSES OF THE TALIBAN AS I AM.

Note: Should anyone wish to reproduce this post, I will be happy to send you the html to make it easy for you. Just leave your e-mail in a comment or e-mail me at simayanan1 [at] gmail [dot] com. MHK
Posted by Mai at 11:12 AM 29 comments: Links to this post