"WHY KHALISTAN? WHAT'S WRONG WITH INDIA?"

Probably the question I get asked most often is: Why do you want Khalistan? What's wrong with India?


The answer to the first question can be short and sweet, or it can be long and complicated, but it always must involve the second. You could, of course, simply look at the blog header pictures. " But that was 25 years ago! Get over it!"

So I have decided to answer the second. I will be publishing articles, current articles, here that answer that question. I'm not sure exactly what I will come up with, but I rather imagine they will cover topics such as poverty, pollution, corruption, caste and the like. I can imagine that groups of people, such as Dalits, Muslims, Christians, even Naxalites will also turn up. I really don't know. We will find out together. I might anger some people. Correction, I will anger some people. I promise, though, that I will tell the truth as reported by the Indian press; I will not exaggerate. Where will this all end? I don't know. Really, I have no idea.

This I do know, we Sikhs built India before there was a country called "India." We were the ones who fought and died and were imprisoned, tortured and executed by the British in the freedom struggle so that Mohandas K. Gandhi and his followers could claim a "nonviolent independence."


We have worked hard. After Partition, our hearts broken by the broken promises of Nehru and Gandhi, we picked up the pieces and marched forward to benefit the nation that had betrayed us. Our farmers in Punjab have fed the nation. Our soldiers have defended the nation. Our businesspeople have largely sustained the economy of the nation.


For these contributions, we are being treated to Sardar jokes, being portrayed in Bollywood as thugs and buffoons, being condemned as terrorists and, in general, being disrespected.

In short, we have lived this old saw:


WE THE WILLING LED BY THE INCOMPETENT HAVE BEEN DOING THE IMPOSSIBLE FOR THE
UNGRATEFUL. WE HAVE BEEN DOING SO MUCH WITH SO LITTLE FOR SO LONG, WE ARE NOW
QUALIFIED TO DO EVERYTHING WITH NOTHING.

Some of us are sick and tired of all this.

That said, this article came to me through IHRO a couple days ago. It is about a tribal woman in Assam who has shown great courage and class in not letting herself be humiliated into silence. Let it be the first in this series.

A tribal woman who was stripped and assaulted in India's north-eastern state of Assam is to contest the parliamentary elections.

Laxmi Oraon has been nominated by the regional Assam United Democratic Front (AUDF).

She was stripped by locals when she took part in a rally in 2007 demanding better tribal rights. 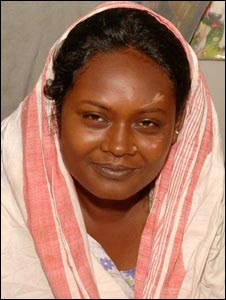 Pictures of Ms Oraon running naked across a market in Assam's capital Guwahati caused outrage in India. (Note: To preserve the dignity of the lady, I haver chosen not to use these pictures.)

Ms Oraon had joined the rally in November 2007 along with thousands of Adivasi tribespeople, who mostly work as labourers in Assam's 800 tea gardens.

The rally turned violent and the Adivasis started vandalising shops and beating up policemen and locals before they were overwhelmed by a huge number of local people.

Ms Oraon was stripped and beaten before an Assamese man took off his T-shirt, covered her and dragged her to safety.

Nearly 16 months later, Ms Oraon has been offered a ticket to contest the Tezpur parliamentary constituency.

"She is a symbol of Adivasi exploitation, of minority exploitation in Assam. We want her to contest the parliament polls on our ticket and she has agreed," AUDF general secretary Hafiz Rashid Choudhury said.

Ms Oraon said while accepting the nomination: "I may not win but I want to make a point. That the Adivasis will no longer take the exploitation lying down."

The AUDF is a Muslim-dominated party but claims to represent other minorities in Assam - among them the Adivasis, whose ancestors were brought from central India to work in Assam's tea estates by the former British rulers.

Assam's ruling Congress party claims to represent minorities fairly, but the AUDF has increasingly sliced into the Congress area of influence among the minorities, especially the state's 30% Muslim population.

"Our party has been set up to represent the interest of all minorities, so we cannot ignore the exploitation of the Adivasis," Mr Choudhury says.

"And Laxmi is a living symbol of this exploitation."

After her humiliation, Ms Oraon has often appeared in the media - particularly in the state of Jharkhand, where her ancestors came from.

She was an honoured guest at the launch of a book by the leader of the Jharkhand Disom party, Salkhan Murmu, in Jharkhand's capital Ranchi last April. 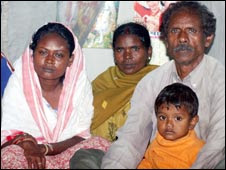 "My humiliation did not end with the stripping and beating. It followed me to the examination centre, where I was taunted and teased," she told journalists.

Ms Oraon and her family have accused the ruling party of trying to "bribe" her to stay quiet after the stripping episode. Congress firmly denied the charge.

It says it handled the issue fairly, setting up a judicial inquiry commission to identify the culprits and punish them.