Usually I would not waste my readers' time writing about a TV "comedy" show, but since this we were told that this one has a "real Sikh" in it, I thought perhaps it might be worth at least checking out.  OK, there is a "real Sikh."  At least he looks like a Sikh.   Here is a little quiz.  I took a few screenshots of this "comedy."  In each of the pictures below, is The Sikh.  Find him, if you can!  Some are very easy; some are more difficult.  Answers below.  (Yes, I know the pictures extend into the sidebar, but there was no other way to get the pictures big enough to actually see him.  I promise, he's still visible in each picture.) 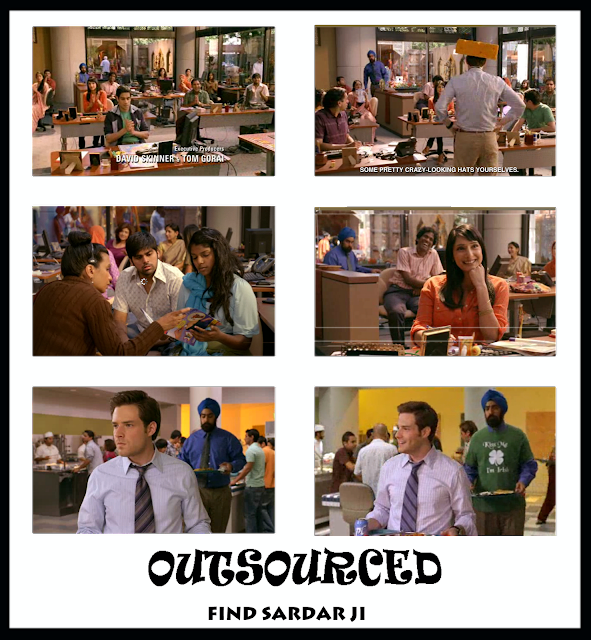 I rarely watch TV comedies because I find them a bit depressing.  My expectations of this show were very low; the show itself was worse.  Just to focus on the Sikh character.  He made a few minor appearances, spoke no lines and each time was glowering, glaring, angry, a bit scary, even to me.  Even the "Kiss me, I'm Irish"t-shirt didn't help.  Of course, he had some cause;  the lead character joshing about his turban isn't a very good start.  I recommend that all Khaliblog readers watch this show once just to see how drearily dismal this thing is..  I have read an on line review of this show, which I am in complete agreement with, although the author might have used less profane language.  The Eight Most Racist Jokes from the Outsourced  Pilot.  Pity me.  To get these screenshots I had to watch the whole dreary thing very closely.  Finding Mr. Singh wasn't always easy.


I would call this show a real dog, except I see no reason to insult our canine friends and companions.  It bears no resemblance to any animal.  It is simply gross, insulting and stupid.
If you'd like to waste a half hour while being insulted, the episode can be seen at   http://www.nbc.com/outsourced/video/pilot/1251026 at least in the USA.  On second thought, you'd be better off doing some naam-jap, though. 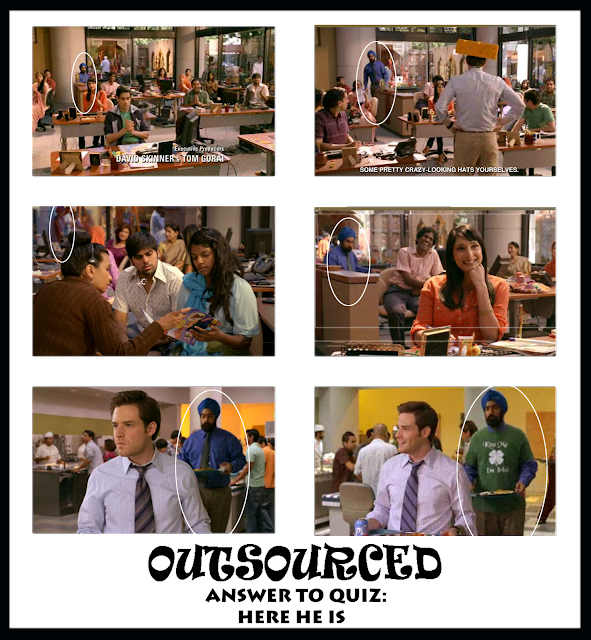 What on earth was SALDEF - a great organisation - thinking when they gave the OK to this drivel?

Posted by Mai at 12:21 AM No comments: Links to this post