Kirpan used to threaten someone in a schoolyard

This is not what I had planned to write today, but again, current events have derailed me a bit. I think this may turn out to be very important to us Canadian Sikhs.

I know only what is in the article below. I have no idea what provoked this boy to draw his kirpan as a weapon. Was he under attack, so it was self-defence? Or was he simply frustrated, annoyed, with no physical threat, as the article implies? I personally have three times used my kirpan in self-defence, always as a response to a physical attack, always, I'm sure, within the boundaries of 'righteousness.'

I do know that the frontal lobes of a 13 year old are not fully developed. This affects judgement, as the young person's brain simply does not fully understand consequences. Very few young teenagers have the maturity necessary to be trusted with a kirpan. Am I saying that very few young teenagers should be blessed with Amrit?
Yes, I think I am. I don't think a young Amrit should be forbidden. There are a few and there are also special circumstances. My own son became Amritdhari at that age. The circumstances were extraordinary; under normal circumstances, he would have waited, albeit impatiently, for a few years.
Amrit is as large a commitment as marriage, even larger, yet we would not think of letting a young teenager impulsively marry, would we? I am not saying a very young Amrit should be forbidden, only that it should not be the norm and that the Panj Piyare should be thoroughly satisfied that the young person is ready for such a serious step.
Another concern is the status of Sikhs in Canada. Bluntly, we are not popular. More bluntly, in some quarters, at least, visible Sikhs especially are considered unCanadian, unpatriotic, disliked, suspected, even hated. Let me direct your attention to the discussion in Dust My Broom, about a Keshdharin Sikh, Jasbir Singh Tatla, in the Canadian Air Force, the first turbaned Sikh in the Canadian Armed Forces. I participate in this discussion as 'simayanan,' always attempting to remain calm and polite, perhaps even too calm and
too polite!
Very likely, Dust My Broom will pick up this story, about the kirpan threat in the schoolyard as well. If so, I will put in a link to that. 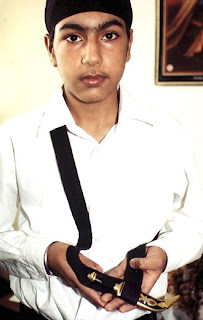 On 6 May 2006, our young people won a very hard legal battle to receive the legal right to wear the kirpan to school in Canada. A similar legal battle is now underway in Australia. I'm afraid this incident might have severe repercussions for Sikhs worldwide.
In addition, we are all aware of the case of Sarika Singh-Watkins in Wales, who had to go to court for the right to wear her kara in school. And need I mention the ban on turbans in school in France? Our Sikh articles of faith are under attack, it seems, all over the 'liberal' Western world. An incident like this really doesn't help our cause. I hope this particular case is thoroughly investigated and whatever discipline is merited is imposed on the boy by the Panth. I'm afraid we will all be called upon to re-establish our credibility, as well as the credibility of the kirpan as an article of faith rather than a weapon.
The young man in the picture is Gurbaj Singh Multani who brought and won this suit in Quebec, Canada - incidentally, where I was born and raised. (picture from globeandmail.com)

Parents of students attending a high school in LaSalle are outraged after a 13-year-old Sikh boy pulled his kirpan on another student this week.

Montreal police say the boy became frustrated with two other students during recess on Thursday, and waved the ceremonial dagger at them in a threatening gesture.

In March 2006, the Supreme Court of Canada ruled that Sikh students are allowed to wear kirpans to school for religious reasons.