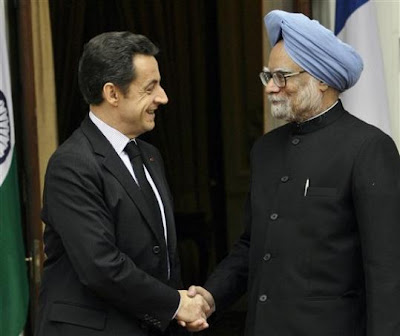 This just came into my inbox. I'll post further details as they arrive. I don't know how complete this about face is. Does it include just official document pictures, such as driver's licences and passports? Or is it trule meaningful and our sons can go back to school? Has Manmohan Singh finally done something more useful than apologising for the 1984 Delhi Pogrom/Massacre/Genocide/Battle? Further information as I get it!
Remember besides being Sikh, I am also 3/8 French...and so I find it doubly annoying when the French act like fools.

France lifts ban on the turban of Sikhs

France. Maulana wrote a letter to PM, a copy of which has been released to the press. It notes that our Prime Minister met the French president, Nicolas Sarkozy on his recent visit to

India. This accorded a good opportunity for our Prime Minister to introduce Indian culture to the French President.

He said that in response of Prime Minister’s request, the President of France had lifted the ban on Sikh turbans and thus accorded recognizance to Indian culture and Sikh’s religious identification in

Maulana Wali Rahmani praised Prime Minster Manmohan Singh on his courage that he did not hesitate in considering it his official duty to represent Sikh’s religion; without being apologetic of being Sikh he himself and strongly recommended that Prime Minister’s example should be followed by political leaders of other communities too.

With the reference to freedom of religion and culture, Maulana Wali Rahmani in his letter drew Prime Minster’s attention toward the arbitrary willfulness of courts regarding the interpretation of Sharia Law. He appealed to Prime Minister to use his authority to stop the court’s schemes undermining the religious and cultural identification of Muslims and Muslim Personal law.

(Translated from Urdu by Sadre Shaikh Qasmi)
Posted by Mai at 9:19 PM No comments: Links to this post