Jagmohan Singh Ahuja - Before And After Picture

I am in tears. My heart aches inside me.

I have been following and writing about this case of the Sikh prisoner in Florida who had his kesh forcibly cut and shaved. Please take a good look at these pictures. I hope posting these does not further humiliate our brother, but I think this needs to be seen. So take a good long look. If this doesn't break any Sikh's heart... 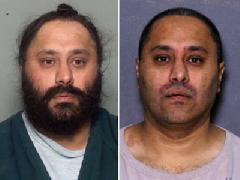 In no way do I excuse his beating his wife. He deserves to be prosecuted and imprisoned for that. I do not accept that he didn't understand that what may be acceptable in Afghanistan is not acceptable in America - if he really did say such a thing, which is open to question.

But prosecution is not persecution. I come from a family where our members have proven under fire that they would die before cutting/shaving. Our hair is Vaheguru's gift to us and keeping it is Guru's gift to us.

We must stand with Brother Jagmohan Singh Ahuja and United Sikhs to end this gross violation of human rights.
To sign the United Sikhs petition to stop this outrage, click here. According to the United Sikhs page, 3353 have signed this petition. Where are the rest of you? Please. This takes only a minute. How many times I have I heard, I'd like to help, but I have no time, no money, whatever. This takes no money and very little time. Can't we unite and do what we can to help this brother and any other Sikh inmates in Florida prisons? So move those fingers on your keyboards and go sign this petition!


JACKSONVILLE, Fla. -- Members of the Sikh religion and the America Civil Liberties Union marched outside the Duval County Jail Sunday, claiming an inmate's religious rights were violated when he was forced to cut his hair and have his face shaved.

Sikhs said Jagmohan Ahuja, a member of their religion, had his long hair cut his beard and mustache shaved while behind bars.

Ahuja, 36, has been held since April 29 on three misdemeanor charges relating to violation of protective order and violation of probation. According to the jail Web site, he is not eligible for bond.

Nonetheless, members of the Sikh religion said they want change.

"We won't stop here until the policy is changed," said Jaspreet Singh of United Sikhs. "It's completely against our religion to cut any hair on our body. It's considered an integral part of our body, part of what you are."

According to reports, when police arrested Ahuja, he told the officer, "I am from Afghanistan and in my country it is perfectly acceptable to beat your wife."

"The state of Florida convicted him and sentenced him to three years in jail. Not three years plus violate his religious rights," Singh said.

On Monday, Channel 4 received the following statement from the city's attorney:

"The Jacksonville Sheriff's Office is committed to respecting and accommodating the religious beliefs of all our inmates population. However, when an inmate's religious practices compromise the safety and security of our corrections facilities, safety and security must take precedence. The Jacksonville Sheriff's Office has a long-standing policy that mandates sentenced male inmates have short hair and wear no head coverings. This policy is consistent with that of many other correctional facilities throughout Florida and the United States. This policy is necessary to assure the safety of all inmates and corrections officers, by limiting an inmate's ability to conceal contraband and/or weapons. This policy has been determined by courts to be lawful. While we fully respect the involved inmate's religious beliefs, the safety and security of our correctional facility must prevail."