A PLEA FROM SOME GAZANS 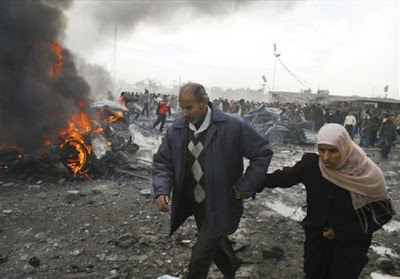 A Post from IHRO (International Human Rights Organisation) today. (Note: I did change one word in this story because I wanted to remove what may have been a religious/ethnic slur. In my effort to keep my comments even handed, I changed the word to "Israelis" in paragraph one. If that annoys you, I'll be happy to personally tell you what I changed. The format has also been altered in my copy/paste. Otherwise, this is unedited.)

"Palestinian medical sources say at least 345 Gazans have been killed and another 1,450 wounded in three consecutive days of Israeli bombardment in the heavily-populated territory." - [Al-Jazeera]

"The situation here is very difficult. They are shooting at us from everywhere, at all targets - military or not." - [Amin Asfour, Gaza City, doctor]

"Unfortunately the situation is very bad in Gaza city - the Israeli occupation is striking more and more organisations, more houses and the mosque, and my university was hit last night. - [Majed Badra, 23, Gaza City]

IS THE WORLD BLIND?.............WHERE ARE THE HUMAN RIGHTS PEOPLE NOW???
IF THIS AN'T TERRORISM THEN WHAT IS IT???
WHY DON'T PEOPLE SPEAK OUT??????
INNOCENT PEOPLE ARE BEING KILLED – CHILDREN, WOMEN, THE OLD, INNOCENT MEN……….WHY????
WHERE ARE THOSE OF THIS WORLD WHO HAVE PLEDGED TO PROTECT? ARE WE HUMAN OR ARE WE ANIMALS? WHAT ARE WE THINKING? WHERE IS OUR COMPASSION? ISRAEL HAS DENIED, FOR VERY LONG TIME, EVEN BASIC HUMAN NEEDS TO THE PEOPLE OF GAZA BY BLOCKADES...NOTHING COULD GO IN NOR COME OUT!! AND WHEN GAZA RETALIATES AGAINST THIS OUTRIGHT CRIME AGAINST HUMANITY, THEN THIS ATROCITY IS ALLOWD TO GO ON!!

crossposted from sometimes - 2
Posted by Mai at 1:35 PM 2 comments: Links to this post