Imagine my astonishment when I went to the CBC website and saw a link to right here!
Hello to all you people who normally wouldn't be reading this blog. Welcome and enjoy!
I just listened to CBC-BC news at 6:00pm. The coverage came after the news of a police shooting, a crack house and the Pickton verdict. You might think they were a little embarrassed or something.
I was chatting with a friend who was listening to Punjabi radio while this was going on. It was reported there that he had been driven to a gurdwara. I feel so good right now. And so proud of the sangat. We squabble about everything, but when the chips are down, all those chips come together to form a solid wall. To get to Bhai Laibar Ji now, our enemies will have to destroy that wall. And they won't be able to, OF COURSE!!

Here is an excellent article from The Vancouver Sun, Kimmy's newspaper.

And here is one from Earthtimes:
In their biggest anti-government rally since the Komagata Maru incident of 1914, thousands of Indo-Canadians forced authorities to stop the deportation of a paralysed Sikh.
The news said that the order of deportation has been stayed and they won't say when that stay will be lifted. hhehehehehehehehe... 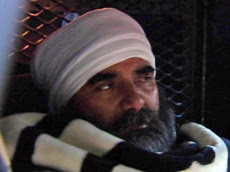 I know, I know. Valiant in defeat, gracious in victory. I just don't feel very gracious right now. (HI, KIMMY!!!) We'll be telling our grandchildren the story of how - without firing a shot or drawing a sword - an army of a thousand Singhs and Kaurs defeated the evil elements in the Canadian Tory government on a winter day in 2007 - with shouts of JAIKAARAA and the help of Guru Gobind Singh Ji Maharaj and, of course, with the blessings of Vaheguru.
VAHEGURU JI
VAHEGURU JI
VAHEGURU JI

BHAI LAIBAR SINGH JI IS NOT ON AN AIRPLANE HEADING TO INDIA!!!

He is in a gurdwara in Vancouver. More than1000 2000 3000 supporters showed up today and would not allow him to be taken from the car to the airplane. Shouts of Je Bole So Nihal! Sat Sri Akal! reverberated through the electrified air as the Army of Guru Gobind Singh Ji refused to allow our brother to be hijacked by Canada's Tory government. Now we have him. He will never be turned over to the Canadian government under any conditions now! I'll post an updated report after the six o'clock news, that will be in about three or three and one-half hours.

PLEASE NOTE: WE HAVE WON THIS BATTLE, BUT THE FIGHT IS NOT OVER. CANADA MAY - PROBABLY WILL - STILL TRY TO DEPORT THIS BROTHER. OUR JOB IS TO STOP THEM WHATEVER THAT TAKES!!

(For those who might not know, here is a good discussion of the meaning of Jaikara, our 'War Cry. I am going to reprint part of this on sometimes - 2, since most of my readers there are not Sikh.)

Here is a link to the news report from Vancouver CBC News at noon: 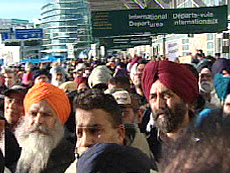 Singh came to Canada in 2003 on a forged passport, but suffered a massive stroke three years later that left him a quadriplegic and unable to care for himself.

He has since argued that he will die if he is deported to India because he won't be able to get proper medical treatment.

Singh initially sought refugee status in 2003 on the grounds that he would be persecuted by police in Punjab, where officials have accused him of links to separatist militants, but his refugee claim was denied that year.

His appeals to stay in Canada were turned down by immigration officials, who ruled Singh couldn't remain because he doesn't have adequate community ties.


Laibar Singh came to Canada in 2003 on a forged passport and suffered a massive stroke last year that left him a quadriplegic.
(CBC)
That's something his supporter, Harsha Walia, of the refugee rights group No One Is Illegal, said is outrageous, based on the support the community has already shown for him.

Walia said 40,000 people have signed a petition urging Ottawa to allow Singh to stay in the country on humanitarian grounds. 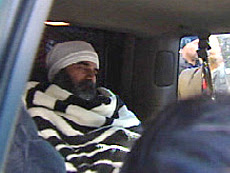 He was first scheduled to be deported on July 8, 2007, but sought sanctuary at the Kalgidhar Darbar Sahib Society temple in Abbotsford instead.

The Canada Border Services Agency then arrested Singh on Aug. 13 at an Abbotsford, B.C., hospital, after he left the Sikh temple to seek medical attention.

With files from the Canadian Press
Posted by Mai at 4:12 PM 7 comments: Links to this post

Who knows what awaits Bhai Laibar Singh Ji in India? No wonder he's afraid. These monsters in the form of humans know no mercy.

I was their guest at the time of the Bluestar Massacre. The story is on this blog at The Last Time I Saw Amritsar Redux

Posted by Mai at 12:44 AM No comments: Links to this post