"There Is None Without Her"

I just added a Sikhtoon to the previous post. Before that, I put the new Sikhtoon lamenting discrimination against turbandharis (I love the versatility of the English language!). I am procrastinating. I do not want to write this post.
First, I need to admit an error. While I don't mean to make a mistake, I don't mind being corrected. A few days ago, I posted a story about the stoning of Aisha Ibrahim Duhulow. Unfortunately, that story is true and accurate. I have discovered, however, that the picture is of some other girl being stoned. I don't think that changes anything, but I strive for accuracy.
Here is another picture that I roached from a site reporting the same story. Is that her? Or some other victim? Does it matter? 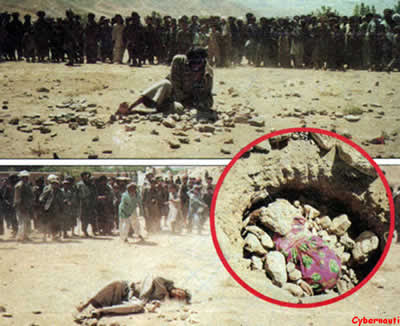 Still another site reporting on that stoning contained this picture. I can't be sure that this was taken at the stoning, but, again, it doesn't matter. To the average person - Sikhs are never average, of course - those guys with hatred in their eyes and turbans on their heads look a lot like us. Who aside from us know the difference between a Sikh turban and a Muslim turban? Point made? 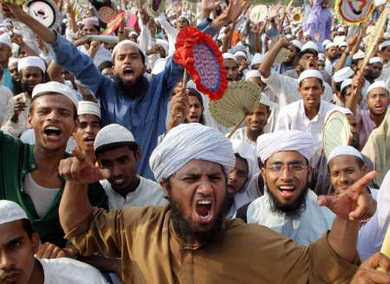 Then today, I just heard about taliban in Kandahar, Afghanistan, driving by on motorcycles and using squirtguns spraying the faces of schoolgirls and their teachers with battery acid. The girl in the picture is named Atifa Bibi. It makes it more real, I think, to have a name. 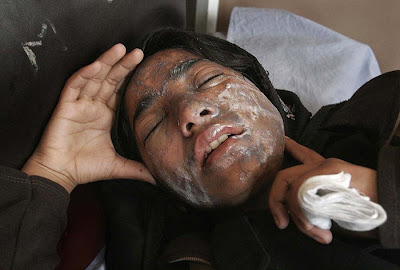 What is all this hatred and disrespect of women? Where does it come from? Do the some Muslims, taking the story of Eve literally, blame women for all the evil of the world? (Please go to the end of this post where I have posted a response.  It was in comments, and I moved it here, so it would not be missed.) Or are they secretly ashamed of their natural, God-given attraction to the opposite sex? Or is it simply that women are smaller and, on the whole, less aggressive than men, and hence easier targets than men?
We Sikhs pray, using Dhan Guru Nanak Dev ji's words in praise and appreciation of womankind: 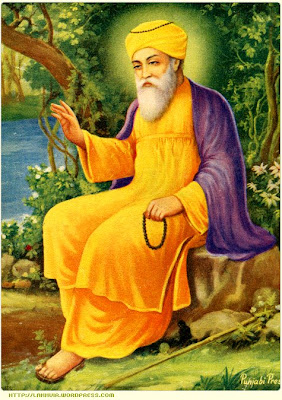 "We are born of woman, we are conceived in the womb of woman, we are engaged and married to woman. We make friendship with woman and the lineage continued because of woman. When one woman dies, we take another one, we are bound with the world through woman. Why should we talk ill of her, who gives birth to kings? The woman is born from woman; there is none without her. Only the One True Lord is without woman" (Guru Nanak Dev pg. 473)

Our beloved founder understood and loved woman at a time when we were, without question, considered and treated as subhuman. I am so happy and proud to be a Sikh. I am so happy and proud to belong to a religion and a people who have outgrown misogyny, who know that the sexes are of equal value, partners in life, a people where all are treated as individuals of infinite value, where women and men are equal, boys and girls equally loved and welcomed into this life.


Hi, I just want to clarify a few things.

Firstly, Muslims do not believe that Eve was responsible for the sin which brought her and Adam to earth.

In fact, reading through the Quran, we will get the impression that it was Adam who was more responsible.

We don't believe that Eve was the temptress of Adam.

Secondly, the Quran instructed both men and women to be modest.

In fact the Quran mentioned men first. Muslim men are instructed to lower their gaze and guard their private parts.

Therefore any assumption that Islam places the responsibility on women not to arouse male sexual feelings is incorrect.

Thirdly, Islam does not say to hurt or injure anyone who does not conform to its mode of modesty, be they Muslim or non-Muslim, male or female.

What happened in Afghanistan is a reflection of that society's continuing failure to understand Islam correctly.

Indeed, if the Afghans are good Muslims, they wouldn't be killing each other after sending the Russians packing.

Fourthly, the stoning of the woman needed clarification.

a ) For someone to be accused of adultery, there must be four adult witnesses who saw the sexual act without any doubt.

If they had merely seen the man on top of the woman but did not see penetration, then the charges of adultery cannot be levelled.

The question is - where is the man being stoned to death ?

There are many things which are wrong in these instances - and only by knowing what Islam actually says in these matters, can one sees the wide schism between Islam and the community which claims to practice it.

Not all Muslims practice Islam in the like manner not all Sikhs practice Sikhism.