THE (CENSORED) STARVING OF GAZA

This is the most outrageous story I have read in some time.

The people of Gaza are being denied the most basic necessities of life, such as food, water and medicine. Israel is also trying to impose a total news blackout on these unfortunate human beings. This reminds me of the lock-down of Punjab in 1984.. The largest difference is that the people of Punjab had food and water.

My dear readers, let us not let these murderers succeed. Let us spread this news to everyone you know; if Israel insists upon committing this atrocity, let us not allow them to do it in silence! Let us shine the light of open knowledge upon this vile deed. Please show this article to everyone. This is not a cheap shot to get readers, this is an impassioned plea from a caring, broken heart. Just make sure this story is known! Don't let these people be destroyed without an outcry. Please.

This reminds me of the way Punjab was sealed off around the time of Massacre BlueStar. In its way, this is worse. The people of Gaza, people very much like you and me, have no access to the necessities of life, such as food, water and medicine. Please make sure all your friends know about this. Remember, the people of Gaza are living. breathing, feeling human beings, for the time being.
I just received and answered a very thoughtful comment from a reader who reminded me that Gaza shares a border with another country, Egypt. The Egyptian nation is Muslim and the Egyptians are the Arab blood sisters and brothers of the Palestinian Gazans. WHY THE HELL HASN'T EGYPT OPENED ITS BORDERS TO HELP THESE PEOPLE??!! I can think of two reasons, neither of which is humane, moral or sufficient. The first is that Egypt is economically cozy with Israel since the days of Anwar Sadat. Money has a very loud voice. The other is that, by and large, in my experience, the Palestinians are not the nicest people in the world. They have a history of violence, crime and terrorism, as a group. They are nonetheless, human beings and deserve to be treated as such. Many of those now suffering are women and innocent children, children who are learning to hate and be violent - and to grow strong. ("What does not destroy me makes me stronger.") I am afraid that Israel and Egypt here have created a situation that neither will be able to control for a long, long time, if ever.
There, my anonymous friend, I have now ripped on Egypt. And I mean what I said.

This story is not being covered by the mainstream media, as far as I can ascertain. I got this off an IHRO (International Human Rights Organisation) posting.


On Top of Humanitarian Disaster, A News Blackout
by Cherrie Heywood

RAMALLAH, West Bank - Israel has imposed a virtual news blackout on the Gaza Strip. For the last ten days no foreign journalists have been able to enter the besieged territory to report on the escalating humanitarian crisis caused by Israel's complete closure of Gaza's borders for the last two weeks. 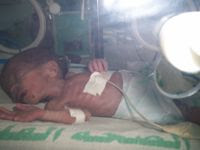 A baby in Shifa hospital in Gaza struggles against illness and lack of medicines and electricity. (Credit:Cherrie Heywood)Steve Gutkin, the AP bureau chief in Jerusalem and head of Israel's Foreign Press Association, said that he personally "knows of no foreign journalist that has been allowed into Gaza in the last week."

Gutkin said that "while Israel has barred foreign press from entering Gaza in the past, the length of the current ban makes it unprecedented." He added that he has received no "plausible or acceptable" explanation for the ban from the Israeli government.

AP has relied on reports from two of its journalists who were able to enter Gaza days before the closure began and are currently stuck there.

A delegation of European Union parliamentarians was also prevented from entering Gaza to assess the situation on the ground and to hold talks with Hamas leaders. They subsequently broke the naval siege of Gaza by entering the coast's territorial waters from Cyprus by boat, defying the Israeli navy.

During talks held with Hamas, the EU parliamentarians were able to get a historic commitment from the Islamic organisation to recognise Israel's right to exist within the internationally recognised 1967 borders. Hamas further offered a long-term ceasefire in return for Israel legitimising Palestinian rights.

EU commissioner for external relations and European neighbourhood policy, Bentita Ferrero-Waldner, has expressed strong reservations. "I am profoundly concerned about the consequences for the Gazan population of the complete closure of all Gaza crossings for deliveries of fuel and basic humanitarian assistance," Ferrero-Waldner said in a statement Friday.

Karen AbuZayd, head of the UN Relief and Welfare Agency (UNRWA) which cares for Palestinian refugees, added that it was unusual for Israel not to let basic food and medicines in. "This has alarmed us more than usual because it's never been quite so long and so bad, and there has never been so much negative response on what we need," she said.

The tit-for-tat violence began on Nov. 4 when the Israeli Defence Forces (IDF) launched a cross-border raid into Gaza, breaking a shaky five-month ceasefire with Hamas. The purpose was ostensibly to destroy a tunnel built by Palestinians allegedly to smuggle captured Israeli soldiers.

More than 20 Palestinians were killed in Israeli raids. Two Israelis were lightly injured in the subsequent rocket attacks.

The timing of Israel's breach of the ceasefire is curious in that hundreds of these smuggling tunnels have existed ever since Hamas took over the strip in June last year. They have been used to smuggle everyday necessities as well as arms because the territory is hermetically sealed by Israel.

John Ging, director of UNRWA in Gaza, who has lived there for the past three years, questioned the alleged security reasoning behind the closure. Since the ceasefire went into place this summer, Ging said, fewer supplies have passed through the crossing than in the beginning of 2006, when the western Negev in Israel suffered incessant rocket fire from Gaza.

At that time the Palestinian Authority (PA), which is supported by Israel and the international community, was ruling Gaza in a unity government with Hamas.

"Last week we were unable to feed 60,000 of Gaza's neediest refugees due to our warehouses running out of food. UNRWA supplies half of Gaza's population of 1.5 million people with emergency rations, and 20,000 people are fed per day when there are adequate supplies," Ging told IPS.

"The Israelis were only allowing 2.2 to 2.5 million litres of fuel in per week prior to the closure, which was the minimum required to operate the power plant. The plant has a capacity for 20 million litres and this would last two months under normal circumstances and tide over emergency periods. But this has all run out," Ging said.

Kan'an Ubeid, deputy chief of the Palestinian Energy Authority, said at a press conference in Gaza that in addition to the shutdown of the diesel-fuelled power plant, the electric network bringing in power from Israel collapsed due to increased pressure on the system.

Gazans also ran out of cooking gas while Gaza's Coastal Municipalities Water Utility (CMWU) was forced to pump tonnes of untreated sewage into the ocean due to fuel shortages and the lack of spare parts for equipment in need of repairs and new parts.

Much of this will flow back into Gaza's underground water table, and the threat of contaminated drinking water spreading diseases has increased.

Sammy Hassan, a spokesman from Gaza city's main Shifa hospital said only urgent surgery was being carried out. "We have delayed all non-urgent surgery as our small generator has stopped working, as we can't import a vital spare part.

"We are down to 30,000 litres of fuel left to run the larger generator which is used when electricity is cut. Under the current circumstances with no electricity we require 10,000 litres per day," Hassan told IPS.

Philip Luther, deputy director of Amnesty International's Middle East programme, said that Israel's latest tightening of the blockade had "made an already dire humanitarian situation markedly worse. This is nothing short of collective punishment on Gaza's civilian population, and it must stop immediately."

Following international pressure and protests from the EU, Israel allowed 30 trucks of humanitarian aid to enter the strip Monday. "It will last a matter of days," said UNRWA spokesman Christopher Gunness. "But then what?"

Oxfam's spokesman in Jerusalem Michael Bailey, who coordinates a number of humanitarian projects in Gaza, said this response was entirely inadequate.

"Thirty trucks of aid after a closure of 10 days is insufficient. What we need is a complete revision of the embargo on Gaza. Dialogue with the relevant political leaders is the only way forward," Bailey told IPS.

"Both Israel and Gaza's other neighbours need to put the human rights and essential needs of Gazans above all considerations if there is to be a way out of this quagmire."