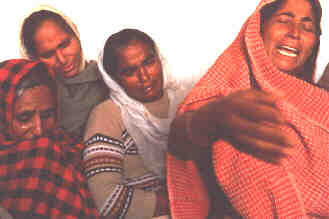 Warning, this post does get a little bit graphic.
Suni's story is in blue, Mai's in red.
Someone suggested in an e-mail that we really should include more details of what happened in November 1984 to our family group. I am not sure what that person really meant, but we think it is about the actual fight. We, Mai and Suni, are here together on this anniversary and will make an attempt to tell in more detail, what happened.

We think it was 4 November. Everything had been very quiet all morning. We, of course, were on edge, but had done our prayers and a lot of singing, some kirtan, but mostly popular stuff. About 1:30 PM, we heard a commotion outside and knew that this was it.


Suni: A few minutes before, I saw a party of shaheeds enter the house. There were about quite a few of them, I didn't count, but I think maybe 40 or 45.


Mani shouted, 'Bole so nihal!' We responded and took up our positions. Suni was seated in the big chair, holding Guru Ji. I was on the stairs leading to the second floor balcony. My brothers were to the left and right of the front door. Sandeep, my son, was in the kitchen doorway. Mohan and Balbir, Suni's husband and son, as the least experienced fighters (Suni: totally inexperienced) were upstairs on the balcony. (I had argued with Mani that I should be in Sandeep's position, since I was a strong fighter, but he refused because of my pregnancy.) Mani, as our commander, was across the room, but directly in front of the door.


What none of us had expected was that they entered from the front and back simultaneously. That one came so fast behind Sandeep that I don't think he ever knew he was hit. I saw it, though, and felt the blood rush to my head in an anger and fury indescribable. He went down with the first blow of the iron bar across the back of his neck, his head at that bizarre angle that I'll never forget.


I remember then Mani shouted, 'Guru Gobind Singh! Waheguru!' and lunged forward. I ran from my position toward the bastard that had killed my son, intending to kill him. Something happened, time seemed to stop. Suddenly there was no noise and no one was moving except me and him. I approached him with my kirtan/dagger (it was now a weapon) drawn and ready. He was terrified. If I live forever, I will never see such fear in anyone's eyes again. His eyes were wide open, as was his mouth - although I heard no sound from it - as I slit his throat from ear to ear. I think I nearly decapitated him. Blood spurted out all over me, my face was wet with it. He stared at me for a moment and then fell at my feet, mouth still gaping open, eyes staring wide. I felt a great satisfaction, as I licked the blood from my lips. Is that enough detail for everyone?


This is Suni. When I sat down with Guru Ji, two Singhnis took up positions on either side of me. Both were tall and strong-looking and heavily armed. The one on my right smiled at me and gently patted my stomach. I could eel her hand.


When Mai went toward that [person]. I also saw everything stop and it happened as Mai has described it, but she could not see herself. The person [he] confronted looked nothing like my cousin/sister Mai. She was huge and tall and black. Her eyes were red and she was the very embodiment of the outraged mother. In short she looked like a most terrifying depiction of Ma Kali. I think that is what that person saw that scared him so much. Of course, I do not believe in Ma Kali, but he did and that's what matters. All the shaheeds just stood and watched.


Mai again. Normal time resumed. Mohan and Bilbar were side by side on the main floor, doing their best to strike with drawn swords, but I saw Bilbar get hit in the stomach with an iron bar and drop his sword. I saw my brothers moving, but I couldn't see clearly what was going on. Two [males] had converged on me and I was busy with them. They kept hitting my body, but I was able to protect my head and kept going. I felt no pain. I could not see Mani, at all.


Suni: They never seemed to notice me sitting there Somehow the shaheeds were able to make me invisible to our enemies, I think. I saw my son drop his sword and geddit in the head with one of their bars. My husband foolishly went to his aid and forgot to protect himself. The two fell in a heap together. The Hindus beat them and beat them with their iron bars.


Mai's brothers were expert fighters, but each was fighting off three opponents and fell. Someone picked up their swords and stabbed them over and over in the chest. There was a lot of blood. By this time, the smell became overwhelming. Not just blood, but also urine and feces. I could barely breathe.


Mani was in control of himself. I could see his mouth moving. 'Vaheguru, vaheguru, vaheguru...' He sword was swinging in rhythm to his words. There were just too many of them and eventually he went down. Mai was a fury. She looked like something out of a Chinese martial arts movie. Eventually, though, she went down, too. They beat everyone after they were down, over and over, with their bars until all of them were bloody all over. I am sure many bones were broken, too. I could tell when someone died because shaheeds would gather around that person, I think to act as an escort and honour guard. I knew that Mani and Mai were still alive, but all the others were dead.


When they finished beating the bodies, for some reason, they left. I'm not sure why. I just sat and clutched Guru Ji. My two lady shaheeds were still with me, so I knew it wasn't over.


We have already described how Mai regained consciousness and got to Mani and their talk, his death and then cleaning the faces. We are not going to retell that now.


Eventually, the mob returned with cans of petrol. They looted the house, then drenched all the bodies with the petrol. Just at that moment, by Guru's grace, a loud voice shouted 'Naamaste!' They stopped dead in their tracks. It was our neighbours, the brahmins. They ordered the mob out and came and rescued me. I knew Mai was still alive and they carried her, bleeding profusely - she was in premature labour by that time, in addition to her other injuries - to their house. The shaheeds followed her and, I think also acted as an escort to her two daughters.


They wanted to relieve me of the burden of carrying Guru Ji, but I wouldn't surrender him to them for anything. As we left the house, the mob, waiting impatiently outside, entered and torched the house. I really didn't know that brahmins had that much power still, but the mob was willing to let us two live. I don't think they ever knew that Mai was a woman.
Picture: We do not know who these women are, just our sisters, survivors like ourselves.
Posted by Mai at 5:29 PM No comments: Links to this post