This just came into my inbox from BBC. I have turned on CNN, MSNBC and Faux News and am watching those horrible green night vision pictures of green toy soldiers carrying rifles and wearing backpacks marching across my screen. I'll report more as I learn more, although I expect you to keep watch on your own television and news sources, as I am just an observer, just as are you.

Israel has confirmed the invasion. I just heard that Hamas fighters are returning heavy fire. The air strikes are continuing ans the invasion continues

At present, I have only this one picture from BBC. 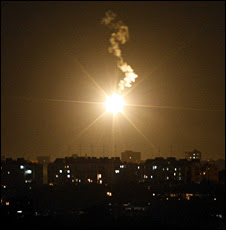 Whichever side you may support in this war, the civilians of Gaza are the ones who are suffering most. Let us remember them in our prayers that they somehow hold onto hope and that they have the strength to endure.

And let us remind the Israeli soldiers that their Jewish religion teaches of a God of mercy who loves all his children of every nationality.