Sikhs And Jews And Sikhtoons

Usually, I try to update my blogs on Fridays. This includes checking out the latest Sikhtoon. (I love Sikhtoons. Don't you?) Today is Thursday and I just felt like not doing my usual Thursday stuff and checked it out early. I found a wonderful 'toon about the first turbaned US commercial pilot - A KAUR! Arpinder Kaur! (See the usual Sikhtoon on the sidebar) This left me overjoyed, of course. I love turbans. I love Kaurs. I really love turbans on Kaurs. And when that Kaur is flying...YIPPEE!!! And getting paid for it...YIPPEE!! YIPPEEEEEEE!!!!!

And a second Sikhtoon talked about Sikhs and Jews.This one: 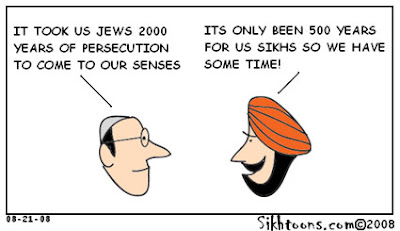 It contained a link to a story from The Jerusalem Post, The multi-faith contingent, which says, in part,


"People are not sure what a future Sikh state would look like and how religion would be a part of the governance of the state. Jews have already had experience with these issues."

Sikhs harbor an aspiration to build their own state in Punjab, a territory between India and Pakistan, that would have a Sikh majority and be run in accordance with the religion's principles.

"Sikhs can definitely be considered a martial race. Although we make up about one percent of the population in India, we constitute between 10% and 15% of the standing army. During British rule the numbers were even higher at between 27% and 30%.

"Like the Jewish people we have had to fight to defend ourselves against our Hindu and Muslim neighbors."

Anyone who has done much reading in this blog, such as, for example, noting the blog's name, should have no problem figuring out my stand on the Sikh national self-determination movement. (By the way, Brother Datta Ji, we are not a race, martial or otherwise. We are a religion, first and foremost and, I certainly hope a nation, but not a race.)

I believe that 'India' is an artificial construct thrown together by the British for their own convenience and the rest of the country will eventually follow the example(s) of Pakistan and Bangladesh and simply balkanise, fall apart. When that happens, we Sikhs must be ready to pick up the pieces of Punjab - the 'Indian' portion of which has already been balkanised by 'India.'
My fervent prayer is that when that happens, we do not follow the example of our Israeli sisters and brothers; we must have a nation where the other, nonSikh inhabitants of the land are respected and treated with honour. All the inhabitants of our land have a right to remain there, with their human rights fully protected and respected. May we all live in peace, freedom and prosperity in the Republic of Khalistan. After all, 'are we not all children of the same God?'
Posted by Mai at 5:29 PM 2 comments: Links to this post

UNICEF - GIVE THANKS FOR WHAT WE HAVE

I am no great fan of UNICEF; they can be wasteful and often aid doesn't get to the people who really need it.

But there are so many other ways to help. Some are very easy and may not cost you anything. Start by conserving your fresh water. Did you know that lack of clean drinking water is an even bigger problem throught the world than is lack of food? Take shorter showers. Turn off the water while you brush your teeth. Wash your dishes in a pan instead of under running water. Be aware of your waste and then cut it out.

Food. To begin with, don't waste it. I have heard that enough good, clean food is thrown away every day in the United States of America to feed every hungry person in the whole world an adequate diet. You might cut out meat, as meat production is very wasteful compared to growing vegetation of various sorts for food. I cannot preach about cutting out all animal products; I am not a Vegan. I love my curd (yogurt) and milk and (rennetless) cheese. I'm sorry, the soy substitutes just don't make it. And what about parshad? It cannot be made without desi ghee, can it?

So what about hungry people? I am a great believer in local action. If you have the education and access to use the Internet, I strongly suspect you have at least a little more than you actually need. There are hungry people in your community. Use your imagination as to how to help. Is it bad when hungry people show up for langar? Or is that part of what our Guru Ji/s had in mind?

Where I currently live, in the United States, there are many food banks where hungry individuals and families can get free food. They always need donations of food, money and time.

I am sure my readers, who are intelligent, caring, thinking people can come up with many other ideas. Whatever you come up with, show your gratitude for what you have by sharing with those who do not.

There is enough for everyone. Let's get it out there! Whatever you're doing, please do just a little more. You'll find that it really is true that the greatest joy in having comes from sharing.

Posted by Mai at 2:09 PM No comments: Links to this post