The Return of Kashmir Singh

I know everyone is avoiding mentioning his 'temporary conversion' to Islam. But I don't ignore things. I will boldly say from experience that you have no idea what you'll do in a difficult situation until you are in it. Thirty-five years is a long, long time to keep your wits about you in such a horrific condition. Who among us could have even maintained the will to live. Somehow Kashmir Singh Ji managed to remain in Chardi Kala!
I also need to express my admiration of his stalwart, determined wife, Paramjit Kaur. Now there is a true Iron Lady.

And I note his first stop in his home village was to his home gurdwara. 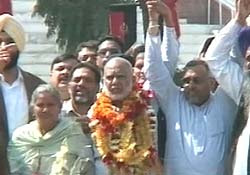 It looked like a victory procession, but it actually was homecoming for former Indian prisoner Kashmir Singh after 35 years of captivity.

He was delighted to be with family and people from neighbouring villages were more than happy to join in the celebrations.

On Tuesday afternoon he walked across the Wagah border after years of solitary confinement in various Pakistani jails.

And when he reached his village in Hoshiarpur, a gurudwara was his first stop. It was the place he used to visit daily as a child.

It was time for reunion with one of his childhood friends. 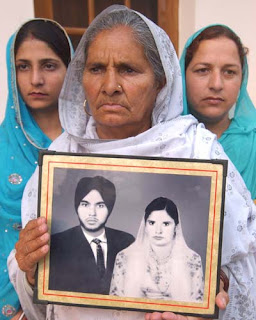 ber the days when we used to play together and get maize and sugarcane from the field and enjoy,'' said Darshan Singh, Friend.

Then it was Singh's turn to show us that his teeth were still good enough to enjoy sugarcane, which he used to have in his village.

While in Pakistan he missed his village, his family, his friends and the sugarcane fields. Now it's time to make up for lost time.

''I missed all this. I used to have sugarcane, now I can have it again as my teeth are still intact,'' said Kashmir Singh.

His village celebrated through the night, a night that has come after years of wait.

Kashmir Singh is back and it is time to celebrate.

Even people from neighbouring villages came to celebrate. Kashmir Singh is also enjoying his old village life, meeting his friends and doing what he missed in Pakistan.
Posted by Mai at 10:02 PM No comments: Links to this post

I am never sure how to react to this kind of nonsense. Can anyone really believe that an outfit like Al Qa

eda, totally male supremacist, could ever be associated with an egalitarian religion like Sikhi? Unfortunately, people see stuff like this and take it for truth! Again, I have no idea what to do except just to state that it's silliness, pure silliness of the most dangerous kind.

Of course, the government of India considers me a terrorist because I support the establishment of our Khalistan. This in spite of the fact that I have never advocated violence and even the Indian government would agree that my one real act of violence was in thoroughly justified self- defence. Ah, well.

My husband keeps telling me that I don't need to save the world, in fact, I cannot save the world. I just toss a 'Chardi kala!' back to him and ask, 'If not me, who?' He glares at me, but doesn't answer. Ah, well.

The Khalistan ribbon is here just because this nonsense annoys me. KHALISTAN ZINDABAD!!

Here is the article:


Members of the Sikh community are in fury over a BBC Radio 4 programme which linked Sikhs with Al Qaeda.

The BBC Radio 4 programme 'File on 4' claimed that Sikh Gurdwara's in Britain are sending money to India to fund the activities of Sikh militants who are pushing for a Sikh homeland called Khalistan.

Many Sikhs feel that the programme lacked "balance" and according to bhangra artists Tigerstyle, it "attempted to sensationalise local gurdwara politics".

Editor of Sikh newspaper The Sikh Times, Gurjeet Kaur said the programme was "irresponsible journalism", adding "it is these irresponsible actions that destroy trust and question relationships. The Sikh community has worked arduously to become model citizens of Britain. Not only have they contributed financially they have and are equally contributing socially to the welfare and future of this country."

Some members of the Sikh community told 'File on 4' they fear the extremists could use Sikh temples the way radical Muslim cleric Abu Hamza radicalised the Finsbury Park Mosque in London.

Indarjit Singh, Director Network of Sikh Organisations said: "In my capacity as Director of the NSO, I have already made my comments known to Paramjit Dhanda the Minister responsible for the Faith and Community Consultative Forum, and earnestly request the British Sikh Consultative Forums (open and closed) and other Sikh groupings to do the same."

Gurmukh Singh, Administrative Secretary of the (open) British Sikh Consultative Forum expressed concern of the programme: "I saw this programme which portrayed Sikh concern for the families of Sikhs killed by the Indian State as something sinister. Truth was stretched almost beyond recognition to portray a negative image of Sikhs by suggesting links between Sikh and Muslim extremists! The programme lacked balance because questionable comments were made by Indian 'security experts' but Sikhs were given no opportunity to respond."

The BBC defended the programme adding: "The programme was presented by Amardeep Bassey an experienced and respected Sikh journalist and included comments from a wide range of agencies and experts. It reflected the concern expressed by the Indian police that militant groups trying to revive the violent campaign for an independent Sikh homeland, are being given support from outside the country, including the UK. The issues we reported are of obvious public interest both to Sikhs and to the wider public and we were at pains to make it clear that we were focusing on the activities of a minority of people."

Posted by Mai at 8:32 PM No comments: Links to this post