I have been reading the Pakistani blogs today. There is much bitterness that Kashmir

Singh was returned alive and well, while the exchanged prisoner from India, Khalid Mehmood, was just a tortured corpse. I do not blame them. Are the Pakistanis just now learning what we Sikhs have been very much aware of, especially since 1984. The Indian government acts in a cruel, heartless manner. I send my sympathies to the family and friends of Khalid Mehmood.. Here is a post on the blog Ronin: Is this how the Indians return a favor? As a Sikh, I would, of course, answer with a resounding YES, thinking of the times we have saved the Hindus' behinds.

The spy returns home after 35 years in prison
Thu, March 13 2008
By Jaideep Sarin 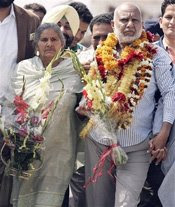 Marking the days in a dark cell, time may have stood still for Kashmir Singh — but life has moved on.

The former soldier who has just returned home after 35 years in a Pakistan prison is coming to terms not only with his children, now grown up, his wife, now wizened with age, but also his village of Nangal Choran in Punjab that he says excitedly has become like Paris.

From Pakistan to a ‘Paris’ in the Indian Punjab, Kashmir Singh, who was released last week after having been condemned to solitary confinement for 35 years as an Indian spy, is awkwardly dealing with the hordes of people around him — perhaps longing for a solitary moment to absorb the tumultuous turn his life has taken.

“Mera pind taan Paris ho gaya hai (My village has turned into Paris),” he says with child-like excitement while sitting in the comfort of his new-found freedom, family and friends in his village in Nangal Choran in Punjab’s Hoshiarpur district, 140 km from the capital Chandigarh.

When he left his village one Sunday in 1973 to enter Pakistan as a spy under the assumed name of Ibrahim, he never thought that he would be away for so long.

In the intervening years, his ‘kuchha’ (mud) home has been replaced by a four-room concrete and bricks structure. Two of his children, a son and a daughter, are now settled in Italy — thanks to the NRI exodus bandwagon in this Doaba belt of Punjab.

His son Amarjit arrived from Italy Thursday and has not corked his liquor bottle ever since to celebrate his father’s ‘rebirth.’ At times, under the influence of liquor, he says the media and others should leave, asking where they were in the last 35 years when the family was suffering. Other family members, including his physically challenged brother Shishpal, have to calm him down.

The balding but bearded Singh, who still does not sport a turban despite being a Sikh by religion, contradicts all theories that he converted to Islam to survive in Pakistan.
“I never converted to Islam. I don’t know from where all this is coming. Of course, as a spy, I went to Pakistan under a Muslim name and religion. That is all. On return, I wanted to wear a pant-shirt or a suit instead of the normal pathani-suit not to give an impression that I converted,” he clarifies.

Singh shed his Ibrahim name only this week when the Indian embassy in Islamabad prepared his travel documents by the name of Kashmir Singh. But the three-and-a-half decades have given him the language and accent used in Pakistan. His vocabulary is mostly Urdu-Punjabi. So hearing him address his wife as “begum” or saying things like “woh toh Allah ko pyara ho gaya” is not uncommon.
Posted by Mai at 10:41 PM 4 comments: Links to this post

Can you imagine being burned alive? Of course, that happened to many of our shaheed brothers and a few sisters during that last day of October and first days of November, 1984. But a very few were burned alive and survived. Gurecharan Singh, 17, was one of those.

Now, 23 years later, he is ready to testify against Sajjan Kumar, one of those responsible for this atrocity. I beg to differ with one line of this story, the one that says:

That terrible act of violence destroyed Singh although he didn't die.

Gurcharan Singh may have had a miserable life - I'm sure he has - but he has not been destroyed. He has lived to serve all of us with his testimony. And we owe him a collective 'Thank you.' 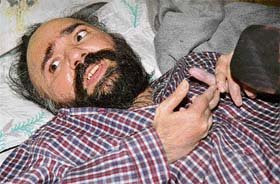 SO, THANK YOU GURCHARAN SINGH JI!

By Ritu Sharma
New Delhi, March 13 (IANS) Twenty-three years after a mob threw him into a burning truck, a barely living Gurcharan Singh is demanding justice after being reduced to a cripple in the 1984 anti-Sikh violence in Delhi. Confined to bed for life after the horrific incident, Singh reached the Karkardooma court in an ambulance Wednesday along with a group of other victims of the 1984 mass violence that left around 2,700 people dead.

A 17-year-old at that time, Singh was a resident of Uttam Nagar in west Delhi when reprisal violence swept Delhi following the assassination of prime minister Indira Gandhi by two of her Sikh bodyguards on Oct 31, 1984.

Mobs incited by politicians immediately took over the streets, killing and raping innocents. Hundreds were injured and traumatised.

The mob that invaded Uttam Nagar killed Singh's father and maternal uncle before catching hold of him and throwing him into a burning truck. This happened on Nov 1.

That terrible act of violence destroyed Singh although he didn't die.

"When I gained consciousness, I found myself in a hospital bed. I was discharged after 10 days to live a miserable life. They (mob) had burnt our shops, homes and killed our people," Singh recalled.

"My brother was also attacked with bricks, leaving him injured in his spine. He has been incapacitated for life. From my family of seven, only two of us are alive," a grieving Singh told IANS in the court complex, speaking from the stretcher that has since then become his permanent shelter.

It was the start of an agonizing life.

Singh registered a case with Delhi Police, accusing Sajjan Kumar, a Congress MP who has been widely blamed for the 1984 mayhem but the police refused to name the MP in the first information report.

And then fear took over.

Living under constant threats of life, because the killers did not want him pointing his accusing fingers against them, Singh quietly moved out to Mohali in Punjab.

The Sikh Gurudwara Prabandhak Committee (SGPC), the Sikh religious parliament, finally came to his rescue, dishing out - in Singh's words - a monthly pension of Rs.10,000.

When the government set up the G.T. Nanavati Commission to probe the anti-Sikh violence, Singh refused to depose. "I feared for my life," he said Wednesday, as two armed policemen from Punjab stood by his side.

One day, prodded by the court, the Central Bureau of Investigation (CBI) came to him to record his statement at Mohali.

And the volcano in Singh burst out.

"I told the CBI that the mob attacking our area was led by Sajjan Kumar. He met the local 'sarpanch' and said: 'They (Sikhs) have killed 'maa' (Indira Gandhi), kill them'," Singh told IANS.

Sajjan Kumar has denied similar allegations against him in the past.

The SGPC also promised to protect Singh, giving him the courage to travel to New Delhi.

Singh has nothing much to look forward to, but he feels strongly that justice needs to be done and those who killed innocents in 1984 should be punished.

He knows that even if that happens, he will remain a cripple for life - for no fault of his.

Babu Singh Dukhiya, president of a forum seeking justice for the 1984 victims, told IANS: "Singh is living a miserable life. His only wish is that the court must record his statement. He knows he may die soon."

(Ritu Sharma can be contacted at ritu.s@ians.in)

Photo: Gurcharan Singh
YOU WERE BORN TO STAND OUT!
Posted by Mai at 12:52 AM No comments: Links to this post