Few survivors have written their stories. That's understandable; it's a horrible, painful chapter and to write is to relive.


Here are a couple of links about some others survivors of Delhi '84. The first, by a young man with cerebral palsy is especially moving to me. Revisiting 1984 by Amrit in the Writing Cave

accounts. These are brief, but contain a lot of information. Not for the squeamish.

This story is about a reporter who was a witness to Trilokpuri, a poor section of Delhi inhabited at the time by S 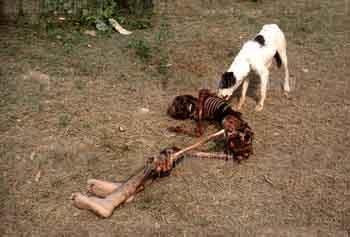 ikhs, Muslims and Hindus, where some of the worst violence occurred.

This picture of the dog eating the roasted man is from Trilokpuri.


I am adding these gruesome links just as evidence that our stories, while more personally told than most, are not really unusual. I was going to put some more links, but I think this is enough to make my point and, frankly, I've had enough of this for now.


WHY TRY TO FIT IN WHEN YOU WERE BORN TO STAND OUT?

Posted by Mai at 6:52 PM No comments: Links to this post

Email ThisBlogThis!Share to TwitterShare to FacebookShare to Pinterest
Labels: 1984, The Battle of Delhi-1984

I sat down this afternoon to start a project. I am organising the stories in my/our blogs in some sort of logical order. At first I thought strictly chronologically, but that didn't work since some posts span a lot of time. So I'm still working on that. Most of these are from Sometimes - 2, but a couple are from The Road To Khalistan . Also they were written and posted in a different order than they are presented here, so one or two references really seem out of place. I'm not editing them now, so please live with it. Also the last two posts are from 1985, but I have decided they belong in this post. I have also just now added another post #13, which expands on what was written before.

I am also adding a new link to the post: We Will Never Forget What Others Don't Even Know Happened . This includes a rather long article about what happened, from a Sikh newspaper. It's not really our personal stories, but it's well worth your time. If you're just looking for our stories, jump down to #1, below.

Suni and I have wracked our brains trying to decide the exact date we actually fought in Delhi - and we keep being unable to be sure. It must have been Nov. 3 or 4, but it might have been Nov. 2 or 5. It really was that confusing and traumatic to us.