Yesterday I received a most remarkable comment on an old blog post, More On Mr. Jagdish Tytler. I will share it with you here and ask for your feedback, please. 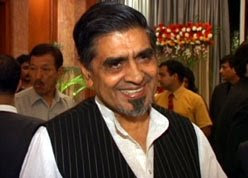 I don't know if anyone realizes this but Jagdish Tytler is really a Sikh. His mother was Dayal Kaur and father was a Kapoor.
His father had died when he was a baby and Tytler helped rear him, hence the name. Jagdish has gone to Gurudwaras his whole life and as an ode to his mother he got married in a Gurudwara by a Granthi. He would never dream of harming a Sikh because he loved his mother dearly.
Things got so twisted in 1984 and it was a case of mistaken identity. People made up stories out of rumors. He is a Sikh by blood.

This is a most remarkable and controversial comment, so much so that I am going to write it up in a separate post, which I hope to get up later today. Here, I will only say that the only people who are "Sikh by blood" are our shaheeds. While one can be blessed to be born into a Sikh family, no one is born a Sikh; that is a choice, a decision. Being a Sikh is not genetic.

So...what do others say about Jagdish Tytler? From my research, whatever his mother may have been, he is no more a Sikh than was his master, Indira Gandhi. I still wish to see him dangling at the end of a rope.

After we dispose of these criminals, I'll be a good little Sikh and oppose the death penalty. No, maybe I won't. I'll be against it except for crimes against humanity. I will have to allow that one exception.