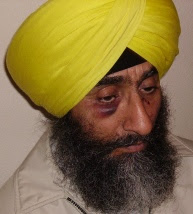 UPDATE - 2: 27 November 11:00 PM - The man who beat Mr. Singh is Luis Vazquez, 20, of Kent. His age raises the question of why did the police simply send him home in a cab and not arrest him for underage drinking?

Sukhvir Singh Ji is back in the hospital. He has acute renal failure and is in great pain.

Anyone wishing to show support to him and his family is asked to send an e-mail to supportsukhvir@sikhcoalition.org.

UPDATE - 1: 27 November 4:45 PM - I just now heard, on an advert during Judge Judy, that the police are calling this a hate crime. More updates as they come.


I live near Seattle. This happened on Gurpurab.

This is a story from the Seattle Post-Intelligencer newspaper with some additional information.


I
This story is from the Sikh Coalition. They are a good group that use money wisely. If you are looking for a place to donate some money, please consider them. Information is at the end of the article.

Coalition Calls on Police and Prosecutors to Take Action

"I am in a lot of pain, and don't understand why someone would do this to me. I love America and hope that in my case, justice will be done."
Sukhvir Singh
(Seattle, WA) November 26, 2007 - A Sikh cab driver was brutally assaulted by a passenger on Saturday, the night of Gurpurab. Sukhvir Singh's attacker threatened to kill him, calling him a "terrorist" as he punched and bit him, pulling locks of hair from his head. The Sikh Coalition calls on the King's County Prosecuting Attorney's Office to prosecute the incident as a hate crime.

On November 24, 2007, Sukhvir Singh had stopped his cab at a deli to eat when two Seattle police officers approached him and asked him to drive home a man who was in their custody. It was the night of a University of Washington football game in Seattle, and the man was intoxicated. Mr. Singh agreed to help the police officers by taking the individual back to his residence, but he never made it there.

On the way to his home, the passenger began to verbally abuse Sukhvir Singh, using religious and racial slurs and threatening to kill him. As his anger escalated, he attacked Sukhvir Singh from the back se

at, putting him in a chokehold and knocking off Mr. Singh's turban. He pulled his long hair so hard that it came out in clumps. Trapped in the I-5's carpool lane, Sukhvir Singh had no choice but to stop the car and get out to escape his attacker. His attacker tumbled out onto the highway with him and continued beating him until Washington State Troopers responded to the scene.

Sukhvir Singh was hospitalized overnight, and has been vomiting ever since he returned home yesterday. Sukhvir Singh, a Kent resident, is shaken. "I am in a lot of pain, and don't understand why someone would do this to me. I love America and hope that in my case, justice will be done," he said.

Seattle's Police Department has not yet begun a full investigation of the incident. The Sikh Coalition is particularly concerned that a police report on the incident does not include any information on the bias motivation for the crime.

"Seattle's public officials need to take a strong stance against bias. We expect that this incident will be investigated and prosecuted as a hate crime," said Jasmit Singh, a member of the board of the Gurdwara Singh Sabha of Washington, and a Sikh Coalition board member.

This is not the first hate attack against a Sikh in Seattle. In October 2001, a Sikh motel owner from Renton was beaten over the head and told to "Go to Allah." In 2003, another Seattle taxi driver was surrounded by a group of men calling him "Osama" and telling him to "Get out of this country." Though his cab suffered thousands of dollars worth of damage, the incident was not prosecuted as a hate crime.

The Sikh Coalition asks all Sikhs to support its call for a hate crime charge in Sukhvir Singh's case. Seattle's Sikh community will be organizing a rally for Sukhvir Singh later this week.

We urge all Sikhs to practice their faith fearlessly. If you or someone you know is a victim of discrimination, please report it to legal@sikhcoalition.org.

The Sikh Coalition is a community-based organization that works towards the realization of civil and human rights for all people. The Coalition serves as a resource on Sikhs and Sikh concerns for governments, organizations and individuals.

The Sikh Coalition relies on your financial support to sustain its initiatives and broaden its services. In addition to supporting the Sikh Coalition directly, we encourage you to use matching donation programs offered by many employers. The Sikh Coalition is a 501c (3) non-profit organization. Thank you for your support.
Posted by Mai at 7:34 PM No comments: Links to this post