GENOCIDERS NEED TO BE CAUGHT AND TRIED 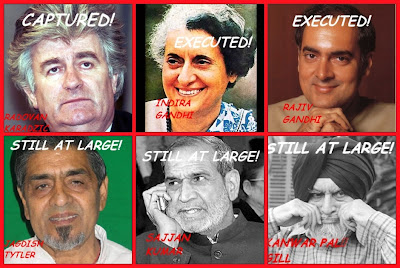 Is the only way to get justice to take matters into our own hands?
VAHEGURU! I hope not. I pray not!
KHALISTAN ZINDABAD!

Posted by Mai at 8:27 PM No comments: Links to this post

And the saga of Brother Laibar Singh Ji goes on. Imagine how hard it must be for his children to say that they can't care for their only living parent.
I have always been proud of being Canadian; one reason for this is that we are a country with a huge heart, knowing that people are more important than money. This whole affair, however, is making me rethink this.
From the Asian Pacific Post
'Please don't send our dad home'

On assignment in India

JALANDHAR, Punjab — As the sword of deportation continues to hang over the head of Laibar Singh, the paralyzed refugee claimant who has spent a year in the sanctuary of a Sikh temple in Abbotsford, British Columbia, his family in this part of the developing world is pleading that he not be sent back to India as he won't get proper medical treatment in his native village.

As the 60-kilometre, bone-rattling road from urban Jalandhar to Singh's village of Sohal Khalsa increasingly deteriorates, so too does the state of the district's infrastructure.

The 90-minute journey into the rural heartland of India's northern state of Punjab reveals a scattered landscape of rudimentary structures and dilapidated dwellings.

With no land or cattle to their name, the youngsters' only source of income is Pinky's sewing business, which brings in a few meagre rupees each day. She takes in work piecemeal, stitching dresses day and night, between the electricity brown-outs that are so common in the region.

After their mother fell ill and died in 1994, life for the Singh family quickly spiralled into penury.

In 2003, after his eldest daughter, Sonia, was married off to a local farming family, Laibar Singh opted to leave his children behind with extended family and seek out employment in Canada.

According to his children, Singh paid a 'travel agent' heavily for his one-way ticket out of poverty. He entered Canada as a refugee claimant, first working in Montreal before shifting to Vancouver.

"He kept sending us money until he got paralyzed and became bed ridden," recalled Kanwaljeet, showing off a picture his dad sent home from Quebec before falling critically ill.

There is no hospital in or near Sohal Khalsa village. Kanwaljeet now goes to a nearby school that is run on charity. His elder sister Sonia, now 23, lives in a nearby village, but visits them by bus on occasion. The youngest sister, 16-year-old Amandeep, lives with an aunt, Laibar Singh's aging sister.

"We alone cannot take care of him," Sonia told the South Asian Post during a visit last week to Laibar Singh's ancestral home.

"He needs good nursing and constant medical check ups. Where the money would come from?"

Following an aneurysm, Singh became paralyzed in 2006 and was placed in a long-term care facility in Vancouver.

Meanwhile, Canada's refugee board rejected his claim and ordered him deported.

An Indo-Canadian nurse at the care facility informed the Punjabi media about the sorry state Singh was living in, seeking help in raising funds to get him a special wheelchair.

As soon as the story hit the media, the demand for granting Laibar Singh legal status to stay in Canada on compassionate grounds began to grow.

Vancouver-based human rights group, No One is Illegal, began lobbying for Singh with the aid of other South Asian organizations and influential individuals within the community.

Since the Canadian authorities were determined to deport him, Singh took sanctuary in an Abbotsford Sikh Temple with the help of friends amidst petitioning and protests — both for and against the immigrant who entered Canada without the proper documentation or authority.

However, over 1,000 people gathered at the Vancouver International Airport to stop Laibar Singh's deportation.

Singh was shipped by supporters to a different Sikh temple after the authorities decided not to wade into the pressing crowd at YVR. He ultimately returned to the same Sikh temple in Abbotsford where he was originally granted sanctuary after two other temples refused to take him in, even after keeping him for several days.

He remains there today.

The Canadian Border Agency has decided to respect the sanctity of the temple and won't enter it to arrest Singh. He is likely to be arrested once he steps outside the temple as the deportation orders against him are still valid.

"We won't be able to look after him well if he is sent back," Pinky said. "We don't have enough resources to provide him with long-term care. We don't have a car either to take him to the city (Jalandhar) in case of emergency."

The villagers of Sohal Khalsa also feel Singh is better off in Canada.

The village Sarpanch (headman), Laimber Singh, told the South Asian Post that they are not equipped to take care of a man in Singh's condition.

"We don't have such facilities even close to our village," he said. "In the city, he would need money to get good care at private hospitals as the government hospitals also lack special services."

Atamjit Bawa, a philanthropist who runs Pingla Ghar, a special home for the disabled in Jalandhar agrees: "We don't have a kind of social security net in India as one in Canada for the poor and people with disabilities."

Varinder Singh, a senior journalist with The Tribune who has been following the case, is also apprehensive about the quality of long-term care provided to the disabled in Jalandhar.

"Even the NGOs cannot guarantee good care, leave aside the ill-equipped government-run facilities," he said.

Dr. Gulzar Cheema, who is looking after Singh in Canada, earlier noted that Laibar Singh won't get adequate care in India.

"What would be the image of Canada before the whole world when a paralyzed refugee claimant is deported and arrives at the Delhi International Airport?," he commented.