I had not intended to write this particular post - it seems a little self-serving to me - but the people involved, especially the lady, have asked me to, so how can I refuse?

Since the stroke a year ago April, my main source of exercise has been walking, first around the house, then around the block, now around the neighbourhood. I enjoy these walks; aside from stretching my muscles, I have met many of my neighbours, almost all of whom are very nice people.


I have recently had a miserable cold that put me out of commission for a while. About a week ago, I was able to resume my ramblings.

Just down the street from us, a few houses away, a Sikh lady about my age was working in her front yard. I had seen her many times, always wearing a pale coloured salwar kameez and a filmy white chunni, usually on her hands and knees, working in her garden. She had always looked up at me and smiled slightly and nodded in greeting, but had never said a word to me, although I always gave her a 'sat sri akaal.' I wondered if she was mute or maybe just shy of talking to strangers.

This time, she jumped up and was suddenly directly in front of me on the sidewalk, blocking my way. She was tall and looked very strong. Her hoe was in one hand and she had a serious, determined look on her face. I greeted her as usual, 'Sat sri akaal.'

She shook her head and looked directly in my eyes, then pointed at my kara, my hair covered by a scarf, my left waistband and then the front of my stomach. The Five Ks? I guessed at what she wanted. 'Waheguru ji ka khalsa, Waheguru ji ki fateh.'

She led me into the soil in her garden. With the handle of her hoe, she began writing in the dirt: a nine, a lower case t with an off-center cross bar and a fishhook on the end, the same t without the fishhook and an 8 with the top broken.

Everyone knows that I lost my Punjabi in the stroke and along with it, my ability to read Gurmukhi. But I have been working on relearning Gurmukhi, starting 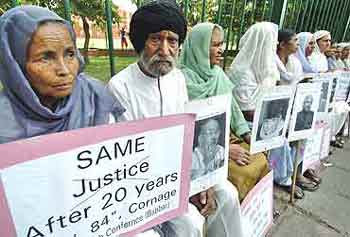 She stared at me for a minute, then in a very small, rusty voice said, 'Mai? Harinder Kaur? Blog?'

I had to make a quick decision. I am very jealous of my privacy and have no desire for anyone to know exactly who I am. But she was clearly my sister and I could neither lie to her nor refuse to answer. I said, 'Yes.'

She looked up, gave me a beautiful, unclouded smile - and burst out laughing.

Immediately, the door to the house opened and a young woman, an older woman, a younger man and a little girl came flying out. The younger woman was screaming, 'Mata ji! Mata ji! Mata ji!' over and over again. She grabbed me and demanded, 'Who are you? What have you done to my mother?!' 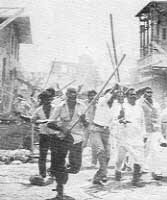 
'You don't know, but my mother hasn't made a sound since that night in Delhi. Nothing. We thought she'd never talk again. Maybe even her vocal chords were broken or something.'

I, of course, was astonished. I knew she was quiet, and I had suspected she might be a 1984 widow.

We all went inside where we had juice and biscuits. They explained that they had found this blog on a Google search of 'Khalistan' some time ago and had been following it, as well as my personal blog. Although she didn't talk, this lady read and wrote both English and Punjabi and had told them that her story was like mine in some ways.

Her story is actually much worse. She, her husband and her son were visiting in Trilokpuri visiting on that day and were trapped there. Her husband and son were burnt alive in front of her. She was treated as all Sikh women were there that day and left to live or die, with two shaheeds watching over her. Yes, she saw the shaheeds, too.

I will not tell her story beyond that. Perhaps she will later tell it herself in this blog or better still, maybe she'll start her own blog.

After our talk, I asked them for a promise. 'I can tell you're not,' I said to the man, 'but are you women amritdhari?'

They didn't want to, but in the end they all agreed. I suggested to the man that, although he was quite handsome with just neck-length hair and a trimmed beard, he'd look and feel a lot better if he joined the rest of his family and took amrit. None of my business, perhaps, but I'm neither shy nor reserved about speaking my mind on this matter. And his wife agreed with me, vigorously! 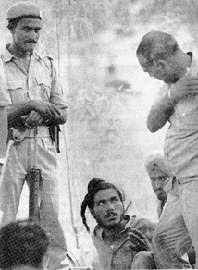 They wanted to meet Suni and Lilly, who were just a few doors away, but they were as sick as I had been the week before, so that had to wait.

Oh, how did the lady know who I was? After all, she had no picture of me and such descriptions as I have given of myself could apply to thousands, maybe millions, of women. All anybody could get out of her was, 'I had a dream.'

The lady herself has read this and tells me it is accurate, and she has chosen the illustrations.
--
WHY TRY TO FIT IN WHEN YOU WERE BORN TO STAND OUT?
Posted by Mai at 10:09 PM No comments: Links to this post