The post from a few days ago got quite a bit of favourable comment in my e-mail and on facebook and orkut, so here's another, this time about the lady who graciously lets me use her name, or rather, nickname. The melody, assuming you are an affectionato of neither Woodie Guthrie (I love his music myself) nor Union Songs, the melody can be found in the credits link just before my lyrics.

My dear son, who is baffled and thinks he errs much more than he actually does, sent me this link to YouTube. I do not support Edwards for US President, I favour Kucinich, for what it's worth. He won't win, but I think he's the best person standing or rather running. Edwards isn't too bad, though. But it makes no difference. Since I'm Canadian, they'd throw me in prison if I voted! Be sure and listen to the third verse here. We women need to be 'at the front of every fight.' Oh, yeah! 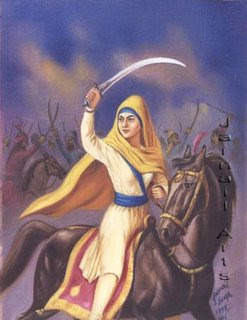 A Song About Mai Bhago - And Us

There once was a Khalsa maid,
She never was afraid,
Of the Mughul might,
She'd always fight
She'd never give up, she'd draw her blade

She'd round them up and say: 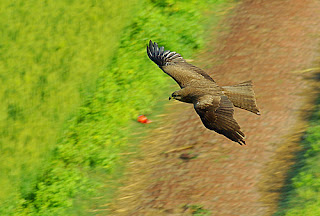 She led them in the ring
Like a hawk that's on the wing
Bole so nihal
And sat sri akaal
For Guru Gobind Singh! 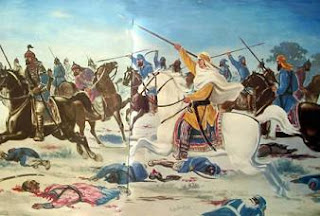 Today's Khalsa maid is bold
As she was in days of old
Her voice soars on
Singing the kirtan
At Harimandir Sahib gold. (Well, soon...) 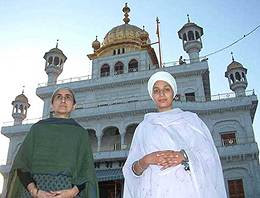 Photograph of hawk (from ABOVE!) by solarider

Photograph of women from Panthic Weekly

Posted by Mai at 9:28 PM No comments: Links to this post