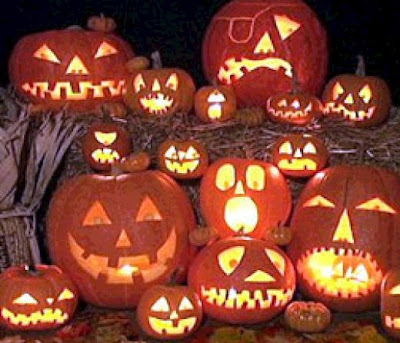 Here is an excellent article about Sikhs and Hallowe'en by Harjinder Singh.

Halloween is a global festival which is cheerfully celebrated with kids trick or treating, people mocking and gimmicking ghosts, ghouls, goblins and demons. For Sikhs on the other hand Halloween carries a real grave significance, of real ghouls and demons, who massacred Sikhs in October and November 1984.

On Halloween, 31st October 1984, Indira Gandhi the Indian Prime Minister was assassinated. (Mai's note: executed) What followed her death was inhumane, depraved and despicable, some call it genocide others ethnic cleansing, I"ll let the readers decide what they feel. The world silently turned a blind eye to these events and rather mourned the death of Mrs Gandhi.

Sikhs were burnt alive, raped, made refugees, murdered on mass, Gurdwaras attacked and Sikh businesses singled out for attacks. All this happened in what Sikhs at the time saw as "mother India." What was the crime of these Sikhs? What had they done to bring out the demons of Halloween?

The bodyguards of Mrs Gandhi who assassinated (Mai: executed) her, were Sikhs, so the orchestrated carnage was planned to "teach the Sikhs a lesson." These children, mothers, daughters, brothers, sisters, fathers and grandparents had no link to the Sikh assassins. In the times of Sri Guru Nanak Dev Jee, Guru Jee saw the destruction of the Mughal ruler Baabar and said,

There was so much slaughter that the people screamed. Didn't You feel compassion, Lord? O Creator Lord, You are the Master of all. If some powerful man strikes out against another man, then no one feels any grief in their mind. But if a powerful tiger attacks a flock of sheep and kills them, then its master must answer for it. This priceless country has been laid to waste and defiled by dogs, and no one pays any attention to the dead (Limb 360, Sri Guru Granth Sahib Jee)

These words ring true of what happened to Sikhs across India following Mrs Gandhi's death, to the extent that Guru Sahibs words above aptly describe the attacks on these common, everyday Sikhs. Sikhs were brutally and clinically attacked in cities across India, Delhi, Kanpur, Patna and the list goes on, over 10,000 Sikhs died between 31st October - 3rd November, 1984, many more refugees lived on with nightmares of what they witnessed.

Hitler killed the Jews in gas chambers which were in secret locations but in India Sikhs were killed in public. The Jews have pursued Nazis for these genocidal acts, today the culprits of Sikh genocide walk free, let's try and achieve some justice. Let's remember these Sikhs and support the surviving families and widows, so the pain of Halloween can be lessened. Please see the links below to start making practical steps in this endeavour;