According to the Globe and Mail, Laibar Singh is now in a New Westminster gurdwara to allow for ease of medical care and for the convenience of visitors. They make a point of saying that he is not seeking sanctuary there.

On the News 1130 website is another article, Refugee claimant staying in New West Sikh temple.

I have been thinking a lot about how this brother of ours must be feeling. Surely he is overwhelmed by the love and support the sangat has shown him. He must also be apprehensive about his future: Will the government continue to try to make an example of him? What will happen with his health.

Having survived a major stroke a bit over a year and a half ago, I have some idea of his condition. All my senses have been dulled. Food has to be overseasoned for me to taste it. I needed new glasses and my hearing has deteriorated. I cannot smell very well and I often smell scents of things that are not present. I have inadequate control of my bodily functions, although medication helps with this somewhat. The paralysed parts of my body have very strange feelings. Cold feels scalding hot. I get bizarre, severe pains somewhat like an electrical shock that the doctors call 'nerve pain.' I also get severe itching that no amount of scratching can relieve since I cannot feel the scratching. By Guru Ji's blessing, I am able to walk and talk, although imperfectly, even though my doctors predicted that I would never do either. At first glance, my face looks no 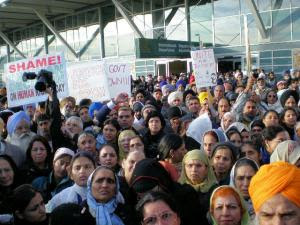 rmal, but my smile, however well intentioned looks like a sneer. That is the physical.

There are also the emotional effects caused, I am told, by the damage to the brain. I have always been rather reserved about expressing my emotions. Since the stroke, however, this is much more difficult. I remember when my friend Lilly's father suffered a massive stroke, this big, strong, tower of strength of a man, dissolved into tears at the slightest provocation. This is not weakness; it is a physiological reaction. I also had recurrances of some symptoms of Post Traumatic Stress Disorder (PTSD), a result of the events of November 1984, that had not bothered me for several years. I will not even try to describe the disorientation and confusion of living in a body that is suddenly malfunctioning and unfamiliar.

Since Laibar Singh's stroke was much more severe than mine, I would imagine that he would have many of the same symptons, only worse. And let me add that I was warned that, while any air travel could be dangerous, a long flight could well be fatal.

Photographs from News 1130
Posted by Mai at 5:46 PM No comments: Links to this post