After the events of 1984 and 1985, after my body had more or less healed. I left my family in a kind of self-imposed exile. I made an agreement with my eldest brother that I would always let him know where I was; he, in turn, would not let anyone know that he knew anything about me. I agreed that I would return to the family after twenty years.

Very near the end of those 20 years, I suffered a major stroke and actually flat-lined, i.e. died, twice. My husband, following instructions I had given him in case I died or was incapacitated, called Alain, who came, along with most of my other surviving brothers and Suni. That is enough background. At the end, I have a question that has been plaguing me through all these years.

(This originally appeared in my personal blog.)


I have hesitated to tell the story of leaving my family because it doesn't reflect well on any of us. But I had written this fairy tale to read to them when I knew we were all getting together.

So last night I read it to them. At the end, (I originally ended it with her roaming madly), they all sat silent for a time. Then Al spoke. 'Mai, you have to put it in your blog.'

'No, it's too personal and I want to keep my blog public. And you come out looking even worse than I do.'

"My dear baby sister, I'm still the King - [he is the head of the family] - and I say it has to go in. But please do something about the ending. We're all here and nobody's crazy any more. Write an ending with some hope.'

Truthfully, that astonished me because Al very rarely speaks as the family head. I looked at the others. They all agreed with Al, so here is the story.

The Haircut - A Fairy Tale

Once upon a time, in the fabled land of Canada in the province called Quebec, there was a magical village named Montreal, where lived two Princesses, Mai and Suni with King Alain their brother, the Queen his wife and their three young Princes in a high tower. There had aforetimes, as they had been traveling in a far land, been a great battle, and the two Princes their husbands, and their children had been slain in honourable combat against a wicked but powerful foe. The elder Princess, Mai, a mighty warrior, as were all her family, had been severely injured in the battle. The younger, Suni, being very heavy with child and, unable to fight, had guarded their most valuable possession, the great scriptures. These were no ordinary scriptures, but living scriptures of such power that, it was said, if men would heed to its words, all people would live in peace and happiness.

After the battle ended, some kind people found the two Princesses and took them back to their royal family, many mile across the vast ocean. When the time came, Princess Suni gave birth to a daughter. Given the necessities of the time, she was named Princess Hope.

In due time, the elder princess, Mai, regained consciousness and in the healing air of the tower, slowly recovered. What a lovely sight the two Princesses made sitting together in the great hall of the tower! Mai, short and slender and fair, with dark brown hair and green eyes. Suni, tall and slender and dark, with shining black hair and soft brown eyes. Both had very long hair which was the custom of the people of their kingdom and was a great joy to them.

This was a time difficult for the whole royal family to endure. Two of King Alain's six brothers and two nephews had been slain, as well as the Princesses' husbands. In addition, it weighed heavily upon him that he had taken a vow to always protect his sisters, a vow he had been unable to keep, since they had been so far from the kingdom.

The King went quite mad. For some days he sat half naked on the floor in the middle of the great hall, wearing only his undergarment, refusing to bathe or even comb his long hair. Meanwhile, no one was governing the kingdom.

One day, Mai, in great distress at her brother's behaviour, called the King to her. He heavily raised himself up and stumbled to where she was sitting near the large fireplace.

Loudly, she said,'Your Majesty, my brother, you are a disgrace. You are dirty, you smell bad and your hair is becoming matted. You are not even properly dressed . Have you forgotten your kingdom? And do you not care what the people of the neighbouring kingdoms will say of us, if even our King behaves so?' She whispered something to him and, when he leaned to hear her, she struck him hard across the face. He cried out and jumped back. Mai, being a warrior, always had her sword with her. She whipped it out and held out her hair and chopped it off. Everyone in the hall gasped, as they knew that her hair was her treasure and to cut it off was a great taboo and she would be terribly disgraced. She threw it into the fire.

Then she turned to her brother and said,'Are you going to act like the King again or do you have to be next?' Again she raised her sword. He, realising her sacrifice, cried and knelt at her feet and said, 'I will do as you say.' The Queen was called. She came and much relieved, took the King and bathed him and dressed him in fine clothes and combed his long black hair until it shone. When next he was seen, his heart was still heavy, but he had regained his sanity and again became the great King he had been before.

In every fairy tale, someone must pay the price for the restoration of the King.

When the insanity left King Alain, it jumped into Princess Mai. A princess no more with her shorn hair, she had no protection from possession by the madness. So, despondent and mad, she left her royal family and the safety of the tower and the kingdom, and went into exile. For twenty years she was heard of no more, as she wandered madly from place to place, having many great adventures, 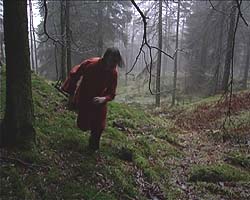 for she still retained her courage and boldness as well as the memories of being a warrior Princess.

At last, after the twenty years passed, Mai was struck down by a mortal illness. As she lay dying and then dead, word of her illness came to her brother the King. With their brothers and their sister, he rushed to her side to revive her. When she opened her eyes and saw her royal family around her, her joy knew no bounds. The King took her in his arms and said,'You once restored me to my throne. It is now my turn to restore you.'

And that is where this blog comes in...

(Next?) The love of her family was so great that little by little, over time,she regained her sanity and became a Princess again. And all the people of the kingdom rejoiced.

I always try to find pictures after I have written and published a post. Alain took a look at that picture and nearly fainted. He didn't really look quite that bad - I add this to save his dignity, after all, he is the king - but almost.


This is my question: Did I, as a Khalsa, do wrong, as I am believe, by cutting my hair? I know I broke a sacred vow with both eyes wide open. I was not insane; I was totally responsible for my actions. I do not accept, as one person has suggested to me, that I acted under duress; I cannot imagine a daughter of Guru Gobind Singh claiming duress. I also believe now, as I believed then, that if I had not totally shocked them, our family would have fallen apart. Of course, it's far too late to change anything now, but I have been bothered by this for a long time.

Personal note to Anonymous, who left a comment on 20 February: We have tried to reply in the comment section numerous times, but for some reason, it refuses to puiblish. So here is what we want to say.

We decided to stop this blog because we felt that our stories had been told.

However, if we are actually helping anyone, we will post here, we will continue this blog and we will share. We can only share our experiences, thoughts and feelings. Only Waheguru knows if our writings will inspire. That part is in her/his hands, not ours.

This blog is the result of our love for Sikhi and of our sisters and brothers of the Panth. We are very happy to know that our efforts have been appreciated and we are deeply greatful that you have told us so.

Vini, Suni and Mai (DKK)
Posted by Dharma Kaur Khalsa at 10:43 PM No comments: Links to this post