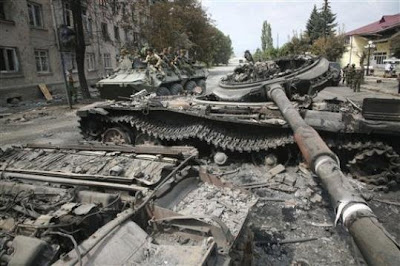 Today I am writing about a news story that has nothing to do with Sikhs directly, but about which I am rather puzzled.

As most of you know, I currently reside in The States. There has been quite a lot of news coverage about the current conflict - war - between Russia and Georgia. Here, the coverage on television, from CNN to Faux News, is uniformly antiRussia. I offer this article by Dmitry Rogozin, Russian ambassador to NATO, as a sort of foil to the overwhelmingly antiRussian coverage. Truth or propaganda?

From Pat Oliphant:
So who do I think is right? Russia? Georgia? Both? Neither? I really have no objective information on which to base a judegment. My heart roots for the little guy, but I'm not sure Georgia is 'the little guy' here. Is little Georgia just a puppet state of George II of America? I don't know. 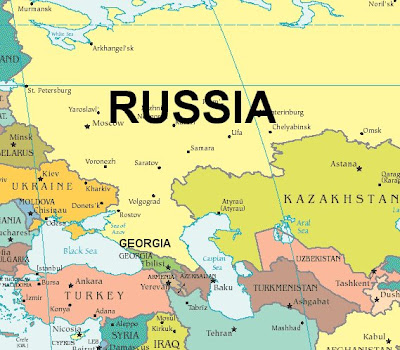 Anyway, here's the article from the Op-Ed page of the International Herald-Tribune:


BRUSSELS: The U.S. administration is trying to stick the label of "bad guy" on Russia for exceeding the peacekeeping mandate and using "disproportionate force" in the peace-enforcement operation in Georgia.

Maybe our American friends have gone blind and deaf at the same time. Mikheil Saakashvili, the president of Georgia, is known as a tough nationalist who didn't hide his intentions of forcing Ossetians and Abkhazians to live in his country.

We were hoping that the U.S. administration, which had displayed so much kindness and touching care for the Georgian leader, would be able to save him from the maniacal desire to deal with the small and disobedient peoples of the Caucasus.

But a terrible thing happened. The dog bit its master. Saakashvili gave an order to wipe Tskhinvali, the capital of South Ossetia, from the face of earth.

The Georgian air force and artillery struck the sleeping town at midnight. More than 1,500 civilians perished in the very first hours of the shelling. At the same time, Georgian special forces shot 10 Russian peacekeepers who didn't expect such a betrayal from their Georgian colleagues.

The Kremlin attempted to reach Saakashvili, who was hiding, by phone. All this time the Russian Joint Staff forbid the surviving peacekeepers to open return fire. Finally our patience was exhausted. The Russian forces came to help Tskhinvali and its civilian population.

In reply to the insulting criticism by President Bush that Russia used "disproportionate force," I'd like to cite some legal grounds for our response. Can shooting peacekeepers and the mass extermination of a civilian population - mainly Russian citizens - be regarded as hostile action against a state? Is it ground enough to use armed force in self-defense and to safeguard the security of these citizens?

Tbilisi concealed the scope of the humanitarian catastrophe in South Ossetia. Saakashvili's constant lies about the true state of affairs in Georgia were attempts to lay the fault at somebody else's door.

The Russian response is entirely justified and is consistent with both international law and the humanitarian goals of the peacekeeping operation conducted in South Ossetia. I will try to explain.

The Georgian aggression against South Ossetia, which came as a straightforward, wide-scale attack on the Russian peacekeeping contingent - Russian armed forces legally based on the territory of Georgia - should be classified as an armed attack on the Russian Federation, giving grounds to fulfill the right to self-defense - the right of every state according to Article 51 of the UN Charter.

Such incidents include the armed operation of Belgian paratroopers in 1965 to defend 2,000 foreigners in Zaire; the U.S. military intervention in Grenada in 1983 under the pretext of protecting thousands of American nationals, who found themselves in danger due to a coup d'êtat in this island state; the sending of American troops to Panama in 1989 to defend, among others, American nationals.

We also have to keep in mind the present-day military interventions by the U.S. and its allies in Yugoslavia, Iraq and Afghanistan. By the way, the last three cases are examples of tough American interventions when its own citizens did not need direct protection. But in spite of those countries' massive civilian losses at the hands of American soldiers, no one blamed Washington for a "disproportionate use of force."

Of course, the history of international relations is full of abuses committed under the pretext of defending citizens.

In order to draw a clear line between lawful and unlawful use of force, one can single out a number of objective criteria: first, the existence of a real threat to life or systematic and violations of human rights; second, the absence of other, peaceful means of resolving the conflict; third, a humanitarian aim for an armed operation; and four, proportionality - i.e., limitation on the time and means of rescue.

Russia's actions were in full compliance with these criteria. In conducting its military action, Russian troops also strictly observed the requirements of international humanitarian law. The Russian military did not subject civil objects and civilians on the territory of Georgia to deliberate attacks.

It is hard to believe that in such a situation any other country would have remained idle. Let me quote two statements:

One: "We are against cruelty. We are against ethnic cleansing. A right to come back home should be guaranteed to the refugees. We all agree that murders, property destruction, annihilation of culture and religion are not to be tolerated. That is what we are fighting against. Bombardments of the aggressor will be mercilessly intensified."

Two: "We appeal to all free countries to join us but our actions are not determined by others. I will defend the freedom and security of my citizens, whatever actions are needed for it. Our special forces have seized airports and bridges... air forces and missiles have struck essential targets."

Does that mean that the United States and NATO can use brute force where they want to, and Russia has to abstain from it even if it has to look at thousands of its own citizens being shot? If it's not hypocrisy, then what IS hypocrisy?