An Open Letter to Tarek Fatah

Bhenji, i have written the following response to Tarek on that blog, however i cannot post it because i do not have an account... if you could post it on my behalf and edit it in any way you feel appropriate that would be greatly appreciated..

Gladly. I am also posting it here as a post without further comment (since sometimes it's hard for readers to get to comments and I really like what you have to say) and will also copy it onto the blog. It needs no editing. Mai.

"Tarek Fatah, Sikhs do not wish for the disintegration of a Nation, however we seek justice for the murders and genocidal campaign against many minorities within the state of India.

Kashmiris, Dalits, Sikhs and Christians (May I add Muslims, as well? Mai) have been victims of gross human rights violations, and the state of India has proven itself unwilling to provide justice to the victims of their oppression.

Tarak Fatah, are you in favour of state terrorism along with India's continued denial and lack of action for the murders of millions... including many minorities outside of the Sikh Fold? Does it not bother you that 24 years after the Delhi Pogroms the murderers of 20 000+ innocent Sikhs who were burnt alive in a period of 3 days continue to roam free while holding seats in Indian Parliamant? Tarek, do you really feel murder, rape, and torture of these innocent Sikhs was justified and that the Indian courts after 24 yrs of mocking Sikhs will build up the courage to arrest and jail those responsible?

Will you, Tarek Fatah... condemn the Indian Government for its gross human rights violations, and stop your slander against Sikhs by defining our calls for justice as terrorism...? Will you..bring an end to your attempt to label Sikhs seeking social justice from a Terrorist State that has shown that they have no care for our rights... as being un-Canadian...

Tarek Fatah... will you deny yourself from standing proud amongst Khalistani Sikhs who define themselves as being Canadians through the pride in fighting for justice for all people, regardless of nationality...? Will you join us in taking pride in the Blue helmet and uniforms pridefully amended by Canada amongst United Nations Peacekeepers...

Or will you continue deny suffering human beings their right for justice, because you feel that justice is a luxury that can only be given to those with a Canadian Citizenship?"

WHY TRY TO FIT IN WHEN YOU WERE BORN TO STAND OUT?
Posted by Mai at 8:42 PM 5 comments: Links to this post 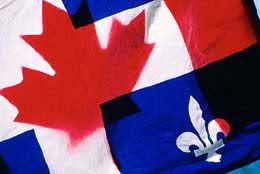