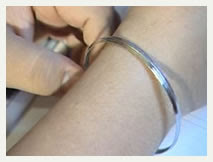 Go here to sign the petition supporting our brave, young sister who is standing up for who she is and what she believes!

She wears a ‘Kara’ to school and because of this she has been isolated in school. The school keep referring to her Kara as a piece of jewellery and therefore a health & safety risk. However, it is a visible article of faith that represents her belief.

Prior to being excluded she had been put into isolation at school and was being taught separately to every other student, as she refused to remove her Kara. While in isolation she was not allowed to talk to any of her friends and was not even allowed to go to the bathroom without a teacher. She has not been allowed to take part in school activities or clubs after school. It is very concerning that Sarika was taught in isolation because of her beliefs.

While in isolation she was not getting taught the education that she should because she was made to copy out of books and if the support teacher did not know about the subject she could not do the work and was told to do something else instead.

Sarika believes that everyone should stand up for what they believe, and she feels that her school by trying to prevent her from wearing her Kara has made her a victim of her belief.

Prior to exclusion she was not receiving the education that she should be receiving like the other pupils in the school. This issue has been going on since May.

Following her exclusion from 5 November the family with the help of Liberty is being forced to seek a judicial review as the school is demanding she remove the small bangle called a Kara. Various parties have tried to resolve this matter by discussing it and arranging meetings (with the school), but the school has not been forthcoming.

Sarika is very upset and wants to go back to school as soon as possible. She is a good student and she wants to see her friends, like any other 14-year-old.

The school bans all pupils from wearing jewellery other than plain metal ear studs and a wristwatch. Up until the exclusion on 5 November the school maintained the Kara was an item of jewellery. Only after the publicity did the school say it also did not allow crosses or head scarves.

The Headteacher is Jane Rosser and has been very forthright in her right to run the school as she deems appropriate. Welsh Assembly member Leanne Wood has said the case shows schools (in Wales) need guidance on uniforms. The guidance is Wales has been pending for four years. In England the guidance put out to schools on Sikh articles of faith has been helpful and allowed schools and the individuals to come to sensible solutions.

Anna Fairclough, of the human rights group Liberty which is providing legal representation has said: “The school's reaction to our client's desire to modestly observe her faith has not only been discriminatory but defies common sense.

“Unfortunately, the school's uniform policy appears to mean that no Sikh can attend the school without compromising their beliefs.”

Following the Mandla v Lee case (House of Lords 1983) Sikhs are protected under the Race Relations Act 1976 and the school is unlawfully discriminating against Sarika. From a legal perspective it is similar to a child being excluded because of the colour of their skin and is totally unacceptable.

The following web site has been set up in support of Sarika:

Please support Sarika by visiting the web site and signing the online petition. You could also circulate this link to friends via e-groups, discussion forums etc.

I imagine by now the whole cybersangat is aware of the predicament of Sarita Singh in Wales. Her school is forbidding her from wearing her kara. The only 'jewelry' her school allows is a wristwatch and plain stud earrings. I think it is ironic that they would allow her to mutilate herself, but not wear her kara. In her own words,


"It's very important to me, it constantly reminds me to do good and not to
do bad, especially with my hands."

This came into my in box this morning. Can we please all go to the link and support our young sister by signing the petition there?


The following web site has been set up in support of Sarika, the 14 year old girl who has been excluded from school in South Wales for wearing the Kara, religious bangle.

Please support Sarika by visiting the web site and signing the online petition.

Aberdare Girls School in Wales has excluded the pupil for refusing to remove her Kara as it says it has a strict policy on jewellery which only allows pupils to wear a watch or stud earnings.

The Kara is a fundamental part of the Sikh religion. It is not a piece of jewelery, but it is an article of faith and expression of religious belief.

It's the least we can do. And I think we need to do it.

The next day: Wednesday, 21 November:

I just checked the petition. It has 433 signatures, of which two were outclicked from this site.

Here is a news update from the India eNews:

From correspondents in London, England, 10:00 AM IST


As the issue involving a Sikh girl's suspension from a Welsh school for wearing a kada, a symbol of Sikhism, appeared headed for the courts, hundreds of people from around the world backed the girl through a website set up to support her.

Sarika Watkins-Singh, 14, of mixed Welsh-Punjabi parentage, has been suspended three times from the Aberdare Girls School for wearing the kada. The school says that wearing it goes against its code, which only allows watches and stud-earrings.

Human rights organisation Liberty, which is directed by Shami Chakrabarti, has taken up Sarika's case. It is arguing that by excluding Sarika, the school's governing body has violated violating the Race Relations Act 1976, the Equality Act 2006 and the Human Rights Act 1998.

Angry, passionate messages against the school authorities have been left by visitors on the website www.supportsarika.co.uk. The website features press and video coverage of the case that has hit the headlines across Britain and elsewhere.

Anna Fairclough, Liberty's legal officer representing the Singhs, said: 'The governing body of the school has ignored established race and equality protections and shamefully turned a young woman into a pariah by isolating her.

'Legal precedents established 25 years ago make clear that she should be allowed to wear the kara without being intimidated by the school.'

I came across this today. It felt good and so I decided to share it with you. It's from Khalistan, The New Global Reality. Although I do wish their cuisine was a little more vegetarian! And the pilot needs to put up the landing gear.
Air Khalistan

Air Khalistan represents the Sikh Nation's committment to comfortable
travel for all passengers, state of the culinary art Khalistani Cuisine, enroute
strengthening and stretching exercise facility and new nondenominational
breakthrough scientific Khalistani Meditation to further enhance the relaxation
and minimize the jet lag for the passengers. Outer space flying will also be an
option where airplane speed of Mach 3-5 will be the standard norm. It will
minimize the travel time and make business travel more efficient. Air Khalistan
look forward to serving you with enthusiasm in the future.

Thanks for visiting our web site.
CEO