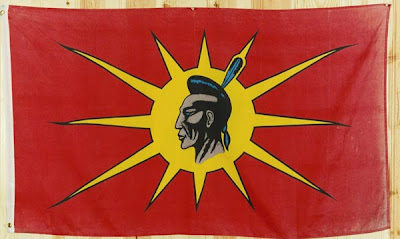 OPP back off!
Free all First Nations Political Prisoners Now!
Hands off Stolen Land: Return the Culbertson Tract to the Mohawks of Tyendinaga!

O Canada!
Our home and native land!
True patriot love in all thy sons command.

For those who may not know, those are the words of the English version of O Canada, the national anthem of Canada.

(It may be interesting to note that there are three official versions of O Canada, in French, English and Inuktitut; and the meaning of the French version is quite different from the English and really not too acceptable to me as a Sikh. Ah, nothing is simple, eh?)

Today, I am looking at one particular line,

A simple line with a clear meaning. But look closely.

God - To me as a Sikh, this is called by the name of Vaheguru, by Muslims Allah, by Christians Jehovah or Yahweh or Jesus Christ, by Jews a name too sacred to be spoken, by Hindus, millions of names, and on and on. I think we can all agree, however, that this refers to our creator, who loves us and whose children we are.

Our - And who, pray tell are 'we'? Does this refer only to the settlers, the colonists, those of us from elsewhere? The English, the French, the Punjabis, the Chinese and on and on? Or does it also include those we call by the proud name of First Nations?

Land - The stuff under our feet. The surface of our mother planet from which we have sprung and on which we live. That which is held sacred by many. In the context of this song, I suppose it simply refers to the politoco-geographic mass we call 'Canada.'
Glorious - I had to look this up in the dictionary just to be sure. I first got this:

1. Having or deserving glory; famous.
2. Conferring or advancing glory: a glorious achievement.
3. Characterized by great beauty and splendor; magnificent: a glorious sunset.
4. Delightful; wonderful: had a glorious visit with old friends.

So then to go to glory:

1. Great honor, praise, or distinction accorded by common consent; renown.
2. Something conferring honor or renown.
3. A highly praiseworthy asset: Your wit is your crowning glory.
4. Adoration, praise, and thanksgiving offered in worship.
5. Majestic beauty and splendor; resplendence: The sun set in a blaze of glory.
6. The splendor and bliss of heaven; perfect happiness.
7. A height of achievement, enjoyment, or prosperity: ancient Rome in its greatest glory.
8. A halo, nimbus, or aureole. Also called gloriole .

And - That is 'in addition to.

Free - Here I stop. What does free mean? Are we talking about political freedom, things guaranteed by the Charter of Rights My dear Canadian sisters and brothers especially, if you have never read it, follow that link; it is not as concise and elegant as the American Bill of Rights, but it is much more specific and clear.

What I am getting to here is that to many of our fellow citizens, Canada has become neither glorious nor free. I am talking about the the Mohawk community in Tyendinaga. Please read the information below and follow the suggestions below in green.

I received this message to the members of The Sikh Activist Network.


I am writing to you today with a heavy heart and a humble request. Over
the course of the weekend, while we have been enjoying our Vaisakhi
celebrations, the Mohawk community in Tyendinaga have been facing armed
invasions by the OPP, in their struggle for sovereignty.

Confronted by threats from construction firm, Nibourg Developments to
begin clearing land for construction along the Culbertson Tract, a
disputed tract of native land, protestors set up a blockade on Monday to
send a message to any would-be developers that there will be "not
another shovel in the ground". The land that is being contested was
signed to Mohawk nations in 1793. The original deed was for 92,000
acres; however, the actual size of Mohawk territory today is 18,000
acres (http://www.ocap/. ca/files/ fsb-rgb-final. pdf
&lt;http://www.ocap/. ca/files/ fsb-rgb-final. pdf> ).

Despite engaging in negotiations with OPP, tension has increased and
police have made 12 arrests, including the arrest of Mohawk leader,
Shawn Brant. The OPP has swarmed Mohawk protestors, with guns pointing
at them from every direction in an attempt to remove them from their
land through intimidation. The Mohawk community is NOT leaving their
land. However, this morning, they are facing armed invasions by the OPP
who are attempting now to physically remove them from their land. As a
result, the Mohawk nation has issued an Emergency call-out to all Allies
to respond in solidarity with their struggle.

This is why I am writing to you today, Sadh Sangat Ji. As a community
who is all too familiar with the colonial struggles that our families
and ancesotrs have faced, I am pleading with you to see the links
between these battles and our own so we can stand in solidarity with
Indigenous communities whose land we reside on. Land is a fundamental
aspect for Aboriginal spirituality. Through the continual loss of their
land, Aboriginal nations will not be able to perform sacred ceremonies
and traditions and will not be able to pass on their spiritual knowledge
to coming generations. As Sikhs, our Gurus have demonstrated the
responsibility we have to protect and defend the freedom of worship for
all peoples, as we would our own.

What you can do:

Please call the premier's office immediately and urge them to:

-Honour Mohawk land, call off the OPP: Do not risk people's lives
for a gravel pit the government has already acknowledged is on Mohawk
land!

2. Call your political allies - please reach out to your MPs and other
political representatives in parliament

OPP back off!
Free all First Nations Political Prisoners Now!
Hands off Stolen Land: Return the Culbertson Tract to the Mohawks of
Tyendinaga!

I sincerely thank you for taking the time to read this message.

We have just been informed by the Tyendinaga Mohawk community
spokespeopl 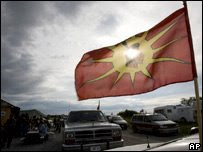 e that SWAT teams are amassing now on the Deseronto
and Slash Roads, bordering the Tyendinaga quarry reclamation site.

Community spokesperson Jason Maracle has just been told by the OPP to
pull people out of the quarry because they are going in.

(Sunday, April 27, 2008 -Tyendinaga Mohawk Territory) Five men from
Tyendinaga are in jail today bringing the total number of First Nations
people in Ontario jails for defending their land to 12.

Ontario, it appears, has opted for the incarceration of First Nations
people over the resolution of outstanding land issues as their status
quo.

As for the Ontario Provincial Police, it appears the adoption of Justice
Linden's Ipperwash Inquiry recommendations is experiencing some delay.
While in custody at the Napanee Detachment several different officers
repeatedly informed Shawn Brant that they were going to "slit his
throat"
and that he was a "dead man."

This followed a similarly disturbing incident that occurred on Monday,
April 22nd during the road closures in Deseronto when an officer on the
scene clearly and audibly commented to her colleagues "we should just
shoot them (Mohawks) all."

Meanwhile, road closures continue in Tyendinaga and Six Nations until,
as
one man said, "We finish the job."

"Of any religion, caste or race, All I see is God's shining face, His
smiling face, His Gracious face"

The flags are those of the Mohawk Nation and of Canada.

Flags: If such things interest you - they do me - you might like to see many tribal flags at Growing Crazy Horse Memorial Flag Collection

Posted by Mai at 1:26 PM No comments: Links to this post