For those of you who think I am too easy on Egypt, I offer you this sad and sickening story. What the hell is going on? 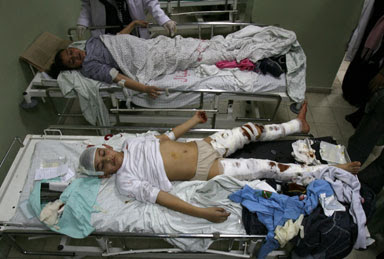 Children prevented from leaving through Egypt border as Palestinian Authority seeks to excise influence on Gaza.

For four days running, an ambulance has driven 15-year-old Amira Ghirim from Shifa Hospital in Gaza to the Rafah border in the hope that she will be allowed to cross into Egypt and then on to France, where she has been promised emergency surgery.

Amira’s left arm and thigh were crushed and her internal organs damaged by falling rubble when a shell hit her home in the Tel al Hawa neighbourhood of Gaza City in the final days of Israel’s offensive. The attack killed her father, brother and sister, leaving her an orphan.

But, despite her urgent need for surgery, Amira has been turned away at the border each time, said her aunt, Mona Ghirim. “Each morning we arrived at the crossing and the Egyptian soldiers cursed us and told us to go away.”

Ms Ghirim said Amira’s condition has been deteriorating because of the long periods out of hospital. Yesterday, after hearing news that the border would remain shut, they decided to abandon the journey. “She is very ill and these futile trips are not helping.”

Amira is one of four children who have been offered potentially life-saving surgery by a team of doctors in France. But she and the other children appear to be victims of a bureaucratic wrangle involving the Palestinian Authority, Hamas and Egypt.

Mohammed Salem, the head of a medical group based in France known as Pal Med, was among the doctors accompanying the children through the crossing last Friday. He said the doctors had been allowed through, but the ambulances carrying the children were blocked. When the doctors tried to return, they were denied entry into Gaza.

“We do not know why the children were refused,” he said. “We had organised all the relevant papers and documents. We were told once we passed through Rafah that the ambulance carrying the children would be allowed to follow.”

The reason appears to be a sudden change of policy by the Palestinian health ministry in Ramallah, which issued a statement the day before the four children tried to leave Gaza saying that it believed there was “no more reason to refer any more children for treatment abroad”.

Nearly 1,300 Palestinians were killed and a further 5,300 injured during Israel’s 22-day attack on Gaza.

In the days immediately after Israel’s declaration of a ceasefire on Jan 18, hundreds of seriously wounded Gazans were transferred through the Rafah crossing into Egypt. Many are being treated in Egyptian hospitals, and others have been sent abroad.

But in recent cases, Egyptian officials appear to have preferred to abide by the wishes of the Palestinian health ministry than create diplomatic friction.
Two of the four children, Hazem Abu Odeh, 12, and Iman Khadum, nine, need surgery to stop bleeding from their kidneys.

A diplomatic source, speaking on condition of anonymity, said Amira and the other children had probably been caught in a political row resulting from the split between the Fatah-controlled Palestinian Authority, based in the West Bank, and the Hamas government in Gaza.

“The PA wants to show it is exercising authority in Gaza, too. It is using its control over the international medical aid reaching Gaza as a way to show it is in charge and making things happen,” the source said.

Ms Ghirim said her niece had been through a terrible trauma. “After the house was shelled, she crawled out of the building to get help, but found the street deserted. She slept out in the open and told me she could hear the voices of soldiers speaking Hebrew all night.

“In the morning she crawled 500 metres to another house to hide. She stayed there until she was eventually found when the owner returned home. He said she was in a shocking condition, covered in blood and dust.”

International medical organisations have been carrying out their own assessments of conditions inside Gaza over the past few days. The World Health Organization is due to issue a report in the coming days.

A team of 12 Israeli Arab doctors from Physicians for Human Rights returned on Sunday. They warned that Gaza’s health care system had been stretched to its very limits and that wounded patients were at risk of dying.

Riyad Haddad, a surgeon at the Carmiel Medical Centre in Haifa, said: “There has been a lot of medical aid, but the treatment doctors are able to offer has been severely compromised by Gaza’s many months of being cut off from the rest of the world.”

He said technicians lacked training to operate modern hospital equipment, doctors had not attended medical seminars on the latest developments in their fields, and there was a severe shortage of trained nursing teams.

He also said that Gaza lacked the psychologists needed to deal with the vast scale of mental trauma inflicted on the population.

Of the thousands of injured, more than 600 would be left with permanent disabilities, he said. “Gaza badly needs proper rehabilitation centres to cope with that number of disabled.”

Dr Haddad said many of Gaza’s doctors he spoke with had reported unusual and difficult-to-treat injuries that appeared to be the result of Israel using experimental weapons during the offensive.

He also warned that unexploded ordnance was already claiming the lives of children, who were playing with munitions lying among the rubble. Last weekend the International Committee of the Red Cross said unexploded ordnance posed a “major new danger” to the civilian population.

Gaza may yet face major epidemics such as cholera that could claim many more lives, Dr Haddad said. “Although most of the bodies have been recovered from the rubble, you can see and smell that there are dead animals – sheep, goats, dogs and cats – everywhere.”

Jonathan Cook is a writer and journalist based in Nazareth, Israel. His latest book is “Disappearing Palestine: Israel's Experiments in Human Despair” (Zed Books). His website is www.jkcook.net. A version of this article originally appeared in The National.

Please feel free to speak your mind. Dissension is allowed and welcomed. I only delete illegal comments and spam. OK, maybe obscene, but not usually.

If you want to contact me personally, my address is theroadtokhalistan@gmail.com